As a long time reader of Joey DeVilla's excellent blog, Global Nerdy, I take exception to his post Fast Food, Apple Pies, and Why Netbooks Suck:

The end result, to my mind, is a device that occupies an uncomfortable, middle ground between laptops and smartphones that tries to please everyone and pleases no one. Consider the factors: To summarize: Slightly bigger and pricier than a phone, but can't phone. Slightly smaller and cheaper than a laptop, but not that much smaller or cheaper. To adapt a phrase I used in an article I wrote yesterday, netbooks are like laptops, but lamer.

This is so wrongheaded I am not sure where to begin. I happen to agree with Dave Winer's definition of "netbook":

Netbooks are the endpoint of four decades of computing -- the final, ubiquitous manifestation of "A PC on every desk and in every home". But netbooks are more than just PCs. If the internet is the ultimate force of democratization in the world, then netbooks are the instrument by which that democracy will be achieved.

No monthly fees and contracts.

Nobody telling you what you can and can't do with your hardware, or on their network.

To dismiss netbooks as like laptops, but lamer is to completely miss the importance of this pivotal moment in computing -- when pervasive internet and the mass production of inexpensive portable computers finally intersected. I'm talking about unlimited access to the complete sum of human knowledge, and free, unfettered communication with anyone on earth. For everyone.

It's true that smartphones are slowly becoming little PCs, but they will never be free PCs. They will forever be locked behind an imposing series of gatekeepers and toll roads and walled gardens. Anyone with a $199 netbook and access to the internet can make free Skype videophone calls to anywhere on Earth, for as long as they want. Meanwhile, sending a single text message on a smartphone costs 4 times as much as transmitting data to the Hubble space telescope.

I don't care how "smart" your smartphone is, it will never escape those corporate shackles. Smartphones are simply not free enough to deliver the type of democratic transformation that netbooks -- mobile PCs cheap enough and fast enough and good enough for everyone to afford -- absolutely will.

That's why I love netbooks. In all their cheap, crappy glory. And you should too. Because they're instruments of user power.

The truly significant thing is this -- the users took over.

Let me say that again: The users took over.

I always say this is the lesson of the tech industry, but the people in the tech industry never believe it, but this is the loop. In the late 70s and early 80s the minicomputer and mainframe guys said the same kinds of things about Apple IIs and IBM PCs that Michael Dell is saying about netbooks. It happens over and over again, I've recited the loops so many times that every reader of this column can recite them from memory. All that has to be said is that it happened again.

Once out, the genie never goes back in the bottle.

Netbooks aren't an alternative to notebook computers. They are the new computers.

Cheap and crappy? Maybe those early models were, but having purchased a new netbook for $439 shipped, it is difficult for me to imagine the average user ever paying more than $500 for a laptop. 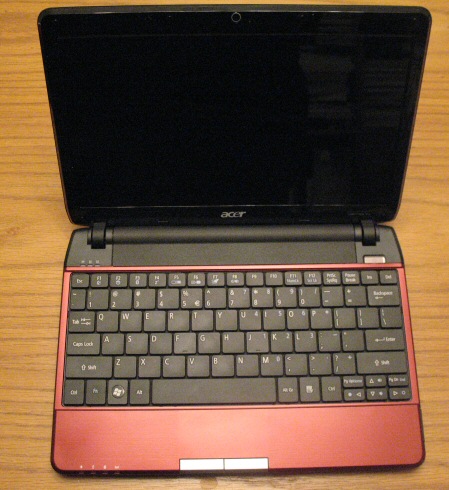 For the price, this is an astonishingly capable PC:

Windows 7 is a fine OS, but this machine would surely be cheaper without the Microsoft Tax, too.

The Acer Aspire 1410 isn't just an adequate netbook, it's a damn good computer. At these specifications, it is a huge step up from those early netbook models in every way. But don't take my word for it; read the reviews at netbooked and Liliputing. (Caveat emptor -- there are lots of 1410 models, and the newer dual core CPU version is the one you want.)

Of particular note is the CPU. While the Intel Atom is a technological coup, I don't feel current Atom CPUs deliver quite enough performance for a modern, JavaScript-heavy, video-intensive internet experience. It is quite clear that Intel is intentionally hobbling newer iterations of the Atom CPU in the name of market segregation, and to prevent too much netbook price erosion.

That's why the current Intel CULV CPUs are far more attractive options -- they're dramatically faster, and have become power-efficient marvels. I hooked up my watt meter to this Aspire 1410 and I was surprised to find it consume between 13 and 16 watts of power in typical use -- while my wife was browsing the web in Firefox, over a wireless connection, with multiple tabs open. I fired up Prime95 torture test to force the CPU to 100% load, and measured 21 watts with one CPU core fully loaded, and 26 watts when both were. These are wall measurements which reflect power conversion inefficiencies of at least 20%, so real consumption was between 10 and 20 watts. I was wondering why it ran so cool; now I know. It barely uses enough power to generate any heat!

Modern netbooks are not cheap and crappy. They're remarkable computers in their own right, and they're getting better every day. Which makes me wonder:

A recurring question among Apple watchers for decades has been, Ã¢â‚¬Å“When is Apple going to introduce a low-cost computer?

Steve Jobs answered that decades-old complaint by stating, "We don't know how to build a sub-$500 computer that is not a piece of junk."

They may be pieces of junk to Mr. Jobs, but to me, these modest little boxes are marvels -- inspiring evidence of the inexorable march of powerful, open computing technology to everyman and everywhere.

We have produced a democracy of netbooks. And the geek in me can't wait to see what happens next.