I've always been fascinated with 3d positional audio through headphones. The nice thing about headphones is that they don't bug your neighbors or your wife-- and they're actually the best way to hear surround sound, too:

The reason for this is that you've only got two ears. The way you tell whether a sound's in front, behind or above you, rather than just to your left or your right, is by processing the complex differences in phase, time delay and frequency balance that're imparted to differently located sounds by nearby objects (like walls), and by the sonic characteristics of your head.

Your pinnae - the outer parts of your ears - strongly influence sound waves that pass through and bounce off them. 3D game audio uses Head Related Transfer Function (HRTF) algorithms to fake the effects of the pinnae, the head and various listening environments, so that injecting the sound straight into the ear canal can produce the impression of real 3D audio sources.

When you've got HRTF-massaged two-channel audio already, for instance when you're playing a game, headphones are obviously the best way to get the sound into your head. There's no way for speakers to do the job as well, because there's no way for them to stop each ear hearing the sound that's intended for the other.

There's a long history of audiophile interest in stereo and binaural recordings, but 3d sound on a computer is a bit different:

Your ear shape (a.k.a. your pinnae) has a dramatic effect on how you hear sound. But don't take my word for it -- hear it for yourself. The 3D hearing test page has a binaurally recorded sound sample using eight different ear shapes. 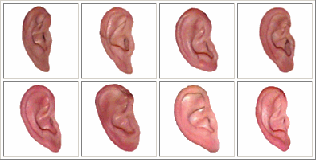 You can hear your PC sound card perform HRTFs using RightMark's 3DSound Positioning Accuracy test. Note that you must switch to DirectSound3D Hardware mode (or better) via the System menu to hear anything more than stereo positioning!

If your card supports EAX modes, try those too. However, when using EAX, make sure you switch to the "plain" environment for apples-to-apples testing. For some reason it defaults to "generic", which colors the sound a bit.

HRTF functions magically convert stereo sound into 3D sound, but they are computationally expensive. That's probably why DirectSound Software mode offers no HRTFs. You need an add-in sound card with hardware acceleration to achieve 3D sound with headphones. The first PC sound card to offer 3D positional sound was the Aureal Vortex via the A3D API circa 1998. I was a huge fan. But unfortunately, Aureal isn't around any more.

So called "onboard" sound -- the kind you get on your motherboard for free -- has improved, but it generally has lower sound quality than a dedicated sound card, and it's certainly not capable of meaningful hardware acceleration. Onboard sound is simply not an option if you're a gamer of any kind. Although I grudgingly installed Creative sound cards in my PCs after the demise of Aureal, it was only because I had no other viable options. I always felt that Creative's 3D sound HRTF algorithms were never as good as Aureal's. Creative's new X-Fi sound cards, however, are finally poised to change that. For one thing, they have a lot more horsepower:

The X-Fi sound cards are also comically overpriced. Three hundred bucks for a sound card? But the lowest-end model, the X-Fi XtremeMusic, sacrifices almost nothing compared to the fancier models and is priced within reason at around $110 online. That's still double the cost of an Audigy 2, but unlike the last umpteen zillion Creative sound card "upgrades", you get a much more powerful card this time with some truly useful new features:

If you're looking for performance improvements over an earlier Sound Blaster card, there are none. It's just more functionality with no performance loss. For more details, check out Extremetech's review of the X-Fi by my pal Loyd Case.

I've been testing the X-Fi with Battlefield 2. It's one of the only two games that explicitly supports the new card's features at the moment (the other being the execrable Quake 4). I always play with headphones, and I noticed the improved 3D sound HRTFs immediately. The sound is also much richer with 128 voices; it's easy to exceed the previous limit of 64 simultaneous sounds in large multiplayer games. I'm very impressed. I also tried the card with Doom 3 using the 1.3 EAX patch and noticed similar improvements.

Although the X-Fi is a wee bit spendy, I can heartily recommend the basic model to fans of 3D audio and headphones. And if you want a clean, non-cluttered install, don't bother with the CD in the box. Just download the latest X-Fi drivers from Creative's website and install those instead. 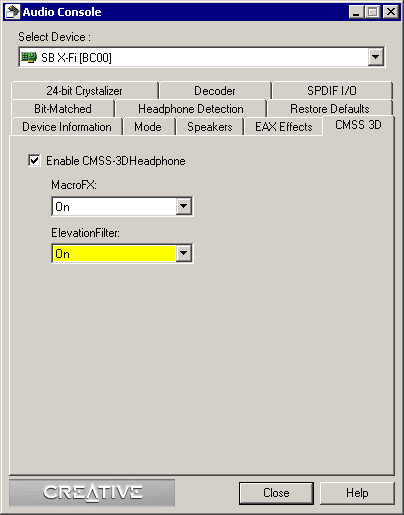 The Creative Audio Console comes with the base driver, and it's all you need to configure the card.

Code Reviews: Just Do It