The Start Menu must be stopped 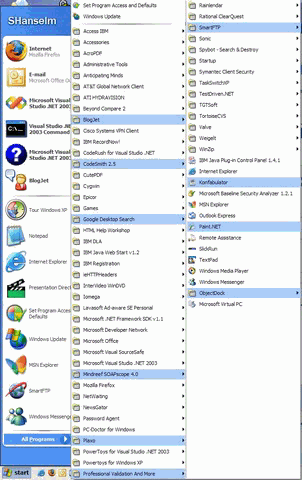 As I struggle to open applications on my PC, I was reminded of a few entries in Scott Hanselman's blog:

I'm not picking on Scott here. I just happened to notice a theme in his posts that jibed with my personal experience. The Windows start menu makes launching applications far more difficult than it should be. A giant horizontal menu may have seemed like a good idea back when Windows 95 was launched-- but clearly, it isn't. I curse every time I have to launch an app that isn't pinned to my start menu, or in the recently launched program list:

The deeper problem with the start menu is that it's, well, a menu. Menus have poor usability. A single "Start" point for the user is a fine idea, but it really starts to break down when you make it into more than a simple, visible list of items, as the All Programs link does. A 2003 usability study showed that all menus are inferior to Yahoo-style index lists, and horizontal menus have the worst usability of all:

The poorest performer, both objectively and subjectively, was the Horizontal layout. Participants in this condition took longer to find the task information, and they had the opinion, though non-significantly, that this layout was more disorientating than the other two layouts. It is possible that the distance this layout was from the center of the screen contributed to its poorer participant performance. In fact, one participant commented that this layout "was more difficult to see and reach than the others because of its height on the screen."

It's clear that traditional menus have no place on web pages, and should be used sparingly in GUIs. And that's the critical problem with the Start Menu: it abuses menus. For launching applications, it's a usability trainwreck. I'm sure they'll be fixing this with Vista [and they do], but in the meantime, what's a poor computer user to do?

Canonicalization: Not Just for Popes

You Can Write FORTRAN in any Language