I've often thought that software developers were akin to Magpies, birds notorious for stealing shiny items to decorate their complex nests. Like Magpies, software developers are unusually smart and curious creatures, almost by definition. But we are too easily distracted by shiny new toys and playthings. 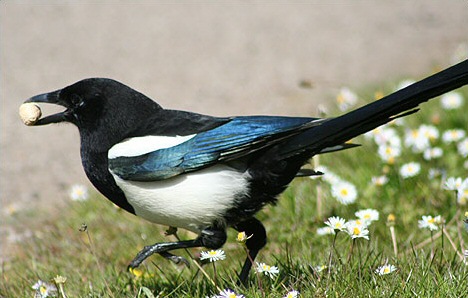 I no longer find Scott Hanselman's Ultimate Developer Tool list inspiring. Instead, it's fatiguing. The pace of change in the world of software is relentless. We're so inundated with the Shiny and the New that the very concepts themselves start to disintegrate, the words repeated over and over and over until they devolve into a meaningless stream of vowels and consonants. "Shiny" and "new" become mundane, even commonplace. It's no longer unique for something to be new, no longer interesting when something is shiny. Eventually, you grow weary of the endless procession of shiny new things.

[Robert Scoble] says that he gets too much email and that is ineffective for getting PR releases to him. He suggests that what you should do now is leave him a message on his Facebook wall. Dear god and/or Bob. In the time I've followed Scoble, I must have seen something like this a dozen times from him. Don't email, Twitter me. Don't Twitter, Pwnce. Jaiku me. Leave a wall message, send an SMS, just call me, email me, don't email me, don't call me. Enough already! I'm not even trying to get in contact with him, and I find this constant migration from platform to platform to be a load of shit that just wearies me. I felt the same way when I dropped TechCrunch, well over a year ago. I got so tired of hearing about another slightly different way of doing what we were already doing and why that tiny difference was worth dropping everything and moving over. I officially renounce the search for the newer and shinier.

It isn't just the neverending stream of tech news. It's also the tidal push and pull of a thousand software religious wars that continually wears us down, like errant rocks in a rapidly flowing stream. I bet the process David Megginson outlines sounds awfully familiar:

1. Elite (guru) developers notice too many riff-raff using their current programming language, and start looking for something that will distinguish them better from their mediocre colleagues.

2. Elite developers take their shopping list of current annoyances and look for a new, little-known language that apparently has fewer of them.

4. Sub-elite developers, who have huge influence (elite developers tend to work in isolation on research projects rather than on production development teams), begin pushing for the new language in the workplace.

5. The huge mass of regular developers realize that they have to start buying books and taking courses to learn a new language.

6. Elite developers notice too many riff-raff using their current programming language, and start looking for something that will distinguish them better from their mediocre colleagues.

I hope you're sitting down, because I've got some bad news for you. That Ruby on Rails thing you were so interested in? That's so last year. We've moved on.

If you consider that, statistically, the vast majority of programmers have yet to experience a dynamic language of any kind – much less Ruby – the absurdity here is sublime. Some dynamic language features are trickling down to the bastions of Java and .NET, but slowly, and with varying levels of success. These so-called thought leaders have left a virtual ghost town before anyone else had a chance to arrive.

I became a programmer because I love computers, and to love computers, you must love change. And I do. But I think the magpie developer sometimes loves change to the detriment of his own craft. Andy Hunt and Dave Thomas, the Pragmatic Programmers who were a big part of the last sea change in Ruby, said it quite well in a 2004 IEEE column (pdf).

Users don't care whether you use J2EE, Cobol, or a pair of magic rocks. They want their credit card authorization to process correctly and their inventory reports to print. You help them discover what they really need and jointly imagine a system.

Instead of getting carried away with the difficult race up the cutting edge of the latest technology, Pete concentrated on building a system [in COBOL] that works for him and his clients. It's simple, perhaps almost primitive by our lofty standards. But it's easy to use, easy to understand, and fast to deploy. Pete's framework uses a mixture of technologies: some modeling, some code generation, some reusable components, and so on. He applies the fundamental pragmatic principle and uses what works, not what's merely new or fashionable.

We fail (as an industry) when we try to come up with the all-singing, all-dancing applications framework to end all applications frameworks. Maybe that's because there is no grand, unified theory waiting to emerge. One of the hallmarks of postmodernism – which some think is a distinguishing feature of our times – is that there's no "grand narrative," no overarching story to guide us. Instead, there are lots of little stories.

Don't feel inadequate if you aren't lining your nest with the shiniest, newest things possible. Who cares what technology you use, as long as it works, and both you and your users are happy with it?

That's the beauty of new things: there's always a new one coming along. Don't let the pursuit of new, shiny things accidentally become your goal. Avoid becoming a magpie developer. Be selective in your pursuit of the shiny and new, and you may find yourself a better developer for it.