I constantly rename variables. It's probably the single most frequent refactoring activity I do. And that's why I love Visual Studio 2005's built-in Smart Tags feature.

If you're not familiar with smart tags, check out K. Scott Allen's post; he has some nice screenshots illustrating how it works. Here's a demo movie of it in action:

Unfortunately, as Scott points out, the smart tags are a pain to use via the keyboard. To maintain compatibility with Microsoft Office's implementation of smart tags, they chose the same keyboard shortcut:

Go ahead. Just try to type that. I double dast dare you. It's the most psychotic keyboard shortcut ever.

If that's the best keyboard shortcut they can come up, I'll stick with mousing over the approximately 5 pixel drop-down trigger area of the smart tag. This is really unfortunate, because the keyboard shortcuts in Visual Studio are generally well thought-out and usable in my experience.

Luckily, I don't have to suffer through this bad keyboard shortcut for a frequent activity. There's an alternate shortcut defined:

But that's still not very intuitive. I prefer to use ..

.. which is an excellent physical map to the conceptual activity of "dropping down" a smart tag menu. You can easily set this new keyboard shortcut up via Options, Environment, Keyboard. Search for commands containing "ShowSmartTag": 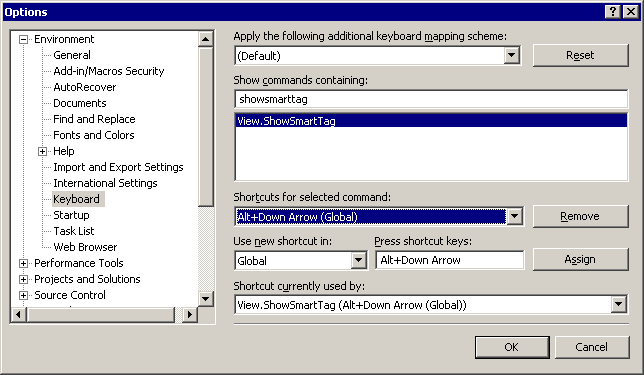