If you're attending, let's meet up somewhere! I've met a handful of people in person at past conferences:

The highlight of SDWest, however, will hopefully be meeting Steve McConnell, who is giving the keynote on Monday. 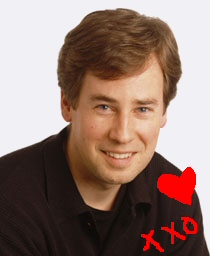 McConnell was my first coding hero.*

I discovered his book Code Complete in 1994 and it was a revelation. Programming is such a solitary pursuit, and particularly so in those pre-internet days. In Code Complete, I found an amazingly passionate, incredibly literate, and consummately professional programmer to learn from. Code Complete convinced me that writing software is what I want to do for the rest of my life. The book-- now upgraded to version 2.0-- has been my bible ever since.

Update: Steve was very gracious, talking at some length with me both before and after his keynote. He even signed my copy of Code Complete 2. As he said, "I guess I should sign on a page with a Coding Horror":

Who are your coding heroes-- and why?

Users Don't Care About You