Why is Ophcrack so fast? Because it uses Rainbow Tables. No, not the kind of rainbows I have as my desktop background. 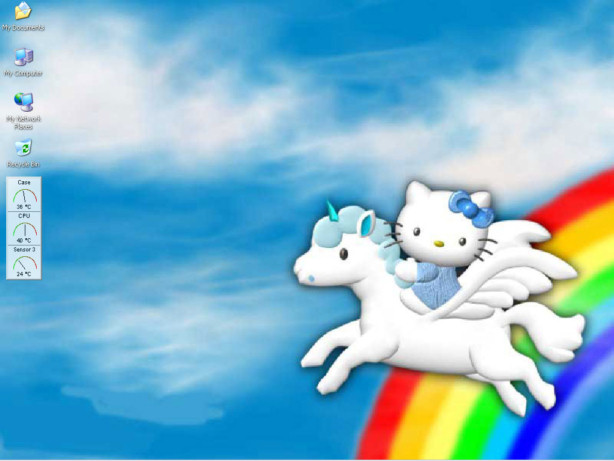 Although those are beautiful, too.

To understand how rainbow tables work, you first have to understand how passwords are stored on computers, whether on your own desktop, or on a remote web server somewhere.

Passwords are never stored in plaintext. At least they shouldn't be, unless you're building the world's most insecure system using the world's most naive programmers. Instead, passwords are stored as the output of a hash function. Hashes are one-way operations. Even if an attacker gained access to the hashed version of your password, it's not possible to reconstitute the password from the hash value alone.

But it is possible to attack the hashed value of your password using rainbow tables: enormous, pre-computed hash values for every possible combination of characters. An attacking PC could certainly calculate all these hashes on the fly, but taking advantage of a massive table of pre-computed hash values enables the attack to proceed several orders of magnitude faster-- assuming the attacking machine has enough RAM to store the entire table (or at least most of it) in memory. It's a classic time-memory tradeoff, exactly the sort of cheating shortcut you'd expect a black hat attacker to take.

How enormous are rainbow tables? The installation dialog for Ophcrack should give you an idea:

It takes a long time to generate these massive rainbow tables, but once they're out there, every attacking computer can leverage those tables to make their attacks on hashed passwords that much more potent.

The smallest rainbow table available is the basic alphanumeric one, and even it is 388 megabytes. That's the default table you get with the Ophcrack bootable ISO. Even that small-ish table is remarkably effective. I used it to attack some passwords I set up in a Windows XP virtual machine with the following results:

You wouldn't expect this rainbow table to work on the passwords with non-alphanumeric characters (%&^$# and the like) because the table doesn't contain those characters. You'll also note that that passphrases, which I am a big fan of, are immune to this technique due to their length. But then again, this attack covered 99.9% of all possible 14 character alphanumeric passwords in 11 minutes, and that was with the smallest of the available rainbow tables. We could do better by using larger, more complete rainbow tables. The Ophcrack documentation describes the differences between the available rainbow tables it uses:

Unfortunately, Windows servers are particularly vulnerable to rainbow table attack, due to unforgivably weak legacy Lan Manager hashes. I'm stunned that the legacy Lan Manager support "feature" is still enabled by default in Windows Server 2003. It's highly advisable that you disable Lan Manager hashes, particularly on Windows servers which happen to store domain credentials for every single user. It'd be an awful shame to inconvenience all your Windows 98 users, but I think the increase in security is worth it.

I read that Windows Server 2008 will finally kill off LM hashes when it's released next year. Windows Vista already removed support for these obsolete hashes on the desktop. Running OphCrack on my Vista box results in this dialog:

All LM hashes are empty. Please use NT hash tables to crack the remaining hashes.

I'd love to, but I can't find a reliable source for the 8.5 GB rainbow table of NT hashes that I need to proceed.

The Ophcrack tool isn't very flexible. It doesn't allow you to generate your own rainbow tables. For that, you'll need to use the Project Rainbow Crack tools, which can be used to attack almost any character set and any hashing algorithm. But beware. There's a reason rainbow table attacks have only emerged recently, as the price of 2 to 4 gigabytes of memory in a desktop machine have approached realistic levels. When I said massive, I meant it. Here are some generated rainbow table sizes for the more secure NT hash:

But when a remote hacker obtains a large list of hashed passwords from a server or database, we're in trouble. There's significant risk from a rainbow table attack. That's why you should never rely on hashes alone-- always add some salt to your hash so the resulting hash values are unique. Salting a hash sounds complicated (and vaguely delicious), but it's quite simple. You prefix a unique value to the password before hashing it:

If you've salted your password hashes, an attacker can't use a rainbow table attack against you-- the hash results from "password" and "deliciously-salty-password" won't match. Unless your hacker somehow knows that all your hashes are "delicously-salty-" ones. Even then, he or she would have to generate a custom rainbow table specifically for you.

UPDATE: Please read Thomas Ptacek's excellent and informative response to this post. It goes into much more detal about the nuts and bolts of password hashing. Unlike me, Thomas is a real security expert.

The Problem With Tabbed Interfaces