My current Tumi wallet was almost 10 years old and starting to show its age. While I never had an enormous Constanza Wallet, I felt I could do better.

I was in the market for a new wallet, but I wanted something… less. In search of an alternative, a coworker turned me on to the superthin All-Ett wallet. 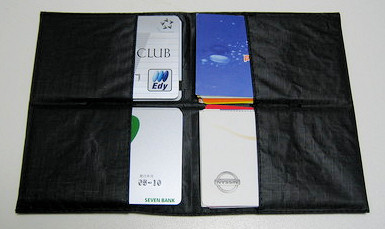 After seeing the All-Ett, I was sold. I ordered one. As promised, the fully populated All-ett was thinner – much thinner! – than my old wallet was empty. Amazing! It's so much more comfortable to sit down with this in my back pocket. I no longer feel motivated to remove my wallet from my back pocket when I sit down. That's important. I don't know about you guys, but I tend to lose my wallet when I leave it lying around various places. Not good.

I only have two minor criticisms:

Minus those minor criticisms, I'm very happy with it. Or at least I was, until I discovered the Tyvek Mighty Wallets – which even come in a glorious fake dot matrix printout style! Be still, my beating geek heart! Since the sailcloth of the all-ett proved a bit problematic, I'm thinking the Tyvek might be a better choice, and placing my new wallet order. Plus: digits of π! On a dot matrix print-out! Come on, man!

Update: I'm happy to report that I used my Mighty Wallet for years, and just decided to replace it in April 2013 (and again in June 2017) as it was finally getting a bit beat up. Since then, there's been an explosion of amazing Mighty Wallet styles. I liked my old dot matrix model so much I bought three new ones!

But there are other popular geek wallets, too, that I've either had directly recommended to me or seen people use:

Those are the ones I see recommended most, but there are plenty of alternatives discussed in similar posts on 43folders and 37signals.

On a related note, I've always wished I could carry a pen, but I've never found one small and convenient enough to add to my existing keychain. There's quite a bit of stuff on there already: a LED flashlight, a Leatherman Squirt, and of course my keys. I'm not sure if I want to add a pen to that list. But there's another way: I can carry a pen in my wallet! I found two wallet pens that could work.

The Derringer Wallet Pen is only $8. Unfortunately, it was slightly too large for my old wallet at 4" long. So I had to give it away. 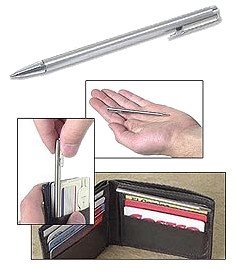 The wallet pen is quite a bit more expensive at $40 $70. But it's made of sterling silver, and most importantly, it's only 3" and even thinner. So it's even more portable.

The wallet pen, as small as it is, fits perfectly in the "crease" of a typical wallet. It does bulge up a tiny bit in the super thin All-ett (and we'll see how it does in the Tyvek wallet), but it still works.

Why not optimize your wallet? You could end up carrying something that's more comfortable, way thinner, and maybe even have something around to write with, too!