Are you familiar with the term "meta"? It permeates many concepts in programming, from metadata to the <meta> tag. But since we're on a blog, let's use blogging to explain what meta means. If you've read this blog for any length of time you've probably heard me rant about the evil of blogging about blogging, a.k.a. meta-blogging. As I said in Thirteen Blog Cliches:

I find meta-blogging -- blogging about blogging -- incredibly boring. I said as much in a recent interview on a site that's all about blogging (hence the title, Daily Blog Tips). I wasn't trying to offend or shock; I was just being honest. Sites that contain nothing but tips on how to blog more effectively bore me to tears.

If you accept the premise that most of your readers are not bloggers, then it's highly likely they won't be amused, entertained, or informed by a continual stream of blog entries on the art of blogging. Even if they're filled with extra bloggy goodness.

Generally speaking, I am not a fan of the meta. It's seductive in a way that is subtly but deeply dangerous. It's far easier to introspect and write about the process of, say .. blogging .. than it is to think up, research, and write about an interesting new topic on your blog. Meta-work becomes a reflex, a habit, an addiction, and ultimately a replacement for real productive work. It's something I think everyone should watch out for, whatever walk of life or career you happen to have. In fact, I've come up with a zingy little catch phrase to help people remind themselves, and their coworkers, how toxic this stuff can be -- meta is murder. 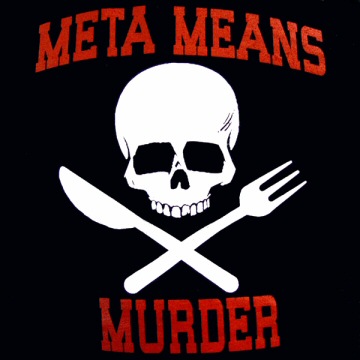 Yes, you read that right. Murder. I mean it. If enough productive work is replaced by navelgazing meta-work, then people will be killed. Or at least, the community will be.

Joel Spolsky had a great example of how meta-discussion can kill community in our latest podcast.

Let's say that you become a podcaster, so you get really interested in podcasting gear. You're going to buy some mixers, and want to know what kind of headphones to use, what kinds of microphones, when should I do the A/D conversions, all that kind of stuff.

So you find this awesome podcasting gear website. And you go on there, and the first subject of conversation is who's going to be elected to the podcasting gear website board of directors. And the second subject of conversation is whether the election that was done last year was orthodox, or was it slightly ... was there something suspicious about that whole thing. And you find a whole bunch of people arguing about that. And then you find a conversation about whether all the people who came in last year from South America and don't speak very good English should be allowed to hang around or should maybe be read-only users for the first six months.

That's all you find there, and you want to talk about mixers and mics. That's why you came to this site!

But they're bored talking about mixers and mics -- they've already had the full mixers and mics conversation all the way to the end, to its logical extreme. They all have, now, the perfect podcasting setup. Except for there's this one minor little thing about whether you should use Monster Cables that people still argue about.

If you don't control it, meta-discussion, like weeds run amok in a garden, will choke out a substantial part of the normal, natural growth of a healthy community.

The danger and peril of meta has been known for years. We had Josh Millard, a MetaFilter moderator, as a guest on the podcast last year. He described how quickly MetaFilter realized that meta-discussion, if not controlled, can destroy a community:

Millard: Matt set up MetaTalk sometime like 8 months after he started [MetaFilter], right about the beginning of 2000, because people were talking about MetaFilter on the front page. It's natural enough. People would say, hey what's with this, hey look at the post, hey this guy's a jerk. So he started up MetaTalk and directed stuff that was metacommentary to that part of the site. You could delete something and say, hey take it over there. If people wanted to have an extended argument that was derailing a thread, they could do it there.

A lot of people cite MetaTalk as a reason that MetaFilter works. If you talk to a regular from the site they'll tell you MetaTalk is key to the success of the site because it's a sort of release valve. Talk pages on Wikipedia are a similar thing. I had the same experience as you the first time I checked those out -- it's not necessarily comprehensible to the casual user what is going on there. But for the people who are regulars, the people who develop a certain amount of passionate attachment to the sites, or really, really need to make their voice heard out of day one beyond just normal participation, you have this safe place you can let people ... let their freak flag fly, as it were, without damaging the core function of the site. You don't have big messes on the front page.

So there's a pretty strong culture of regulars who hang out on MetaTalk. Insofar as you have the big contributors and the serious regulars at any given site that make up the core of the community, there's a strong correlation between those people and the people who actually spend time on MetaTalk dealing with policy stuff and talking about user issues.

Atwood: Right. I totally get that. This is one of the things about designing social software -- you don't really understand it until you've lived through it. For the longest time I couldn't understand why people couldn't respect the rule we had to not discuss this meta stuff on the site itself. I totally get this now.

We've dealt with our meta problem on Stack Overflow, finally. OK, I had to be dragged kicking and screaming to finally do what I should have done months ago, but what else is new?

Anyway, my point is that meta isn't just a social software problem. Meta is a social problem, period. It's applicable to everything you do in life.

Software developers are known for their introspection, and a certain amount of meta is healthy. It qualifies as sharpening the saw -- mindfulness of what you're doing, and how it can be improved. But it's amazing how rapidly that can devolve into a crutch, a sort of methadone for Getting Things Donetm.

So sure, get meta when it makes sense to. But do be aware of what percentage of the time you're spending on meta. And consider: how is progress made in the world? By sitting around and debating the process of how things are done ad nauseam? Or by, y'know … doing stuff?