Love It, Hate It

Brendan Kidwell noted something interesting about the comments on Trackpoint versus Touchpad:

You know, I just realized that there is a lot of LOVE and HATE going on, and it doesn't seem to be very unified.

Software development is basically a religion. It's not surprising that software developers are predisposed to these kinds of religious arguments. Pick your poison:

I am reminded of Robert Mitchum's character in the movie The Night of the Hunter, a preacher with the words "love" and "hate" tattooed on his left and right hands: 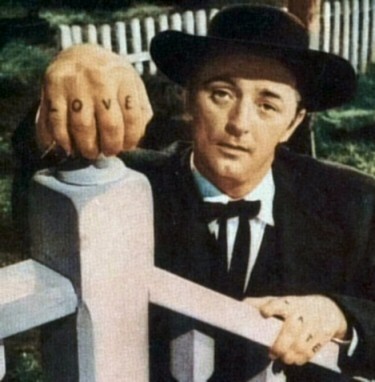 Would you like me to tell you the little story of right-hand/left-hand? The story of good and evil? H-A-T-E! It was with this left hand that old brother Cain struck the blow that laid his brother low. L-O-V-E! You see these fingers, dear hearts? These fingers has veins that run straight to the soul of man. The right hand, friends, the hand of love.

Heavily partisan discussion-- lovers on one side, haters on another-- isn't conducive to civilized discourse. Jon Stewart's now-legendary appearance on Crossfire was a textbook indictment of this style of debate. It's not debate at all; it's pure theater. Entertainment. Professional wrestling, if you will.

This is a common problem with online reviews at Amazon and other sites. The people most strongly motivated to post reviews are those who either:

Either way, you're getting a distorted opinion based on the select few who had a strong enough negative or positive reaction to spur them into action. It may be fun to read, in a partisan sort of way, but it's difficult to distill the vitriol into something you can base a reasonable opinion on. What about the vast, silent audience who liked it despite its flaws?

That said, a certain amount of controversy is desirable. If nobody cares enough about what you're doing to tell you that they loved it or that they hated it, it's probably not interesting enough to be good, either. As Kathy Sierra points out, you should strive for a little controversy:

If you're out there creating something on the edge, someone's going to hate it. Probably a lot of someones. One thing we noticed from our Amazon reviews was that we get mainly five-stars and one-stars, but not much in the middle. They either love it a lot or they hate it with a passion. Whenever I start to feel bad about a scathing review, I remind myself that Don Norman said, "If someone doesn't really hate your product, it's mediocre." And mediocre is where you SO do not want to go.

Ever since we started this crazy scheme (18 months ago with the release of the the first book in the series), we've been thinking that the extremeness of our reviews was a good thing, and now someone's confirmed it. A NYTimes article looks at a professor who analyzed Amazon book rankings for, among other things, a book's "controversiality index". From the article:

"But the most telling variable is the one star rating. Professor Gronas found that books high on what he called the "controversiality index" are given almost as many one-star as five-star ratings, creating a horseshoe-shaped curve. As it turns out, these books also tend to have high sales."

The last reaction you want to anything you've done is a resounding "Meh." Go out of your way to create something that will inspire people to love it. Unfortunately, that means a few people will probably hate it, too. The love/hate dichotomy has value. But it's also important to maintain perspective. It's all too easy to fall into the trap of framing your discussions in that old timey religious love/hate dynamic.