Do you remember the scene from the movie Full Metal Jacket where the marines recite the USMC creed? 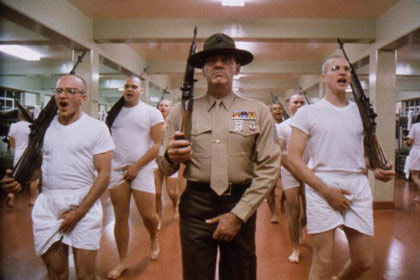 It's a little known fact, but programmers have a similar creed:

In fact, GUIDs are so near and dear to our hearts that we recently had a spirited discussion about them at work. Let's say you had a string and needed to determine whether it was a valid GUID. The easy way is a .Parse() style Try-Catch code block:

This is the correct answer.. most of the time. But you know programmers. They never met an edge condition they didn't enjoy discussing ad nauseam. And I was one of the first to chime in:

This is definitely a good way to validate a data type, however, just be aware of the exception performance penalty. Throwing exceptions on failure to cast is expensive, so if this is something that

then you'd want to go with a non-exception based check. However most of the time none of these things are true, so the performance is irrelevant.

Then someone suggested trying a regular expression. Oh great, now we have two problems:

It's valid, but I couldn't resist tweaking this regex for simplicity's sake. The official GUID spec only defines one format for GUID strings, the familiar 8-4-4-4-12 format:

This is my post, so I'll skip the part where others poked holes in my regex. Just when we thought it was over, a fellow developer whipped out a code snippet that benchmarks how long it takes to validate GUIDs via each method:

According to this, constructor validation is 3 to 4 times faster than the regex.. or is it? I immediately noticed a few problems that made this a rather questionable benchmark. And, as before, I couldn't resist investigating:

You typically wouldn't want to create a new regex inside the loop, because it's too expensive. If I move the regex creation outside the loop:

If I set RegexOptions.Compiled on the regex:

If I run the above with CTRL+F5 (sans debugger):

It was definitely a fun discussion. I certainly learned a few things about GUIDs I didn't know. Heck, discussions like this are why I joined a software development company in the first place. But it's also a pointless discussion.

Performance was a complete non-issue in this particular scenario. That's why we should always program with Occam's Razor in mind:

Given two similar code paths, choose the simpler one.

Edge conditions and fancy techniques are interesting, but they're not necessarily a worthwhile use of time. Sometimes the simple and stupid solution is all you need.

Microsoft naming: who stole the soul?