A World of Endless Advertisements

While reading Larry O'Brien's latest column in SD Times, I couldn't help noticing that the article text was dwarfed by the advertisements. 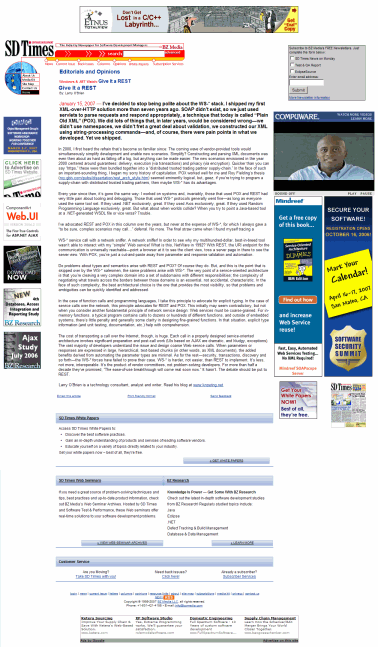 I was curious exactly how much of the page was dedicated to advertising. There's a clever technique used in the book Homepage Usability: 50 Websites Deconstructed to measure the composition of webpages. 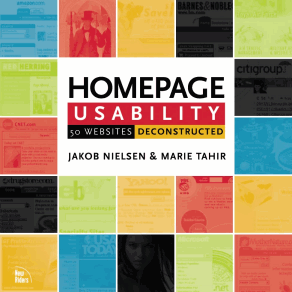 The fifty corporate homepages used in the book didn't contain much advertising, but I was still amazed how little screen real estate is dedicated to actual content. Let's apply the same technique to the SD Times page. I'll highlight navigation, content, and advertising. 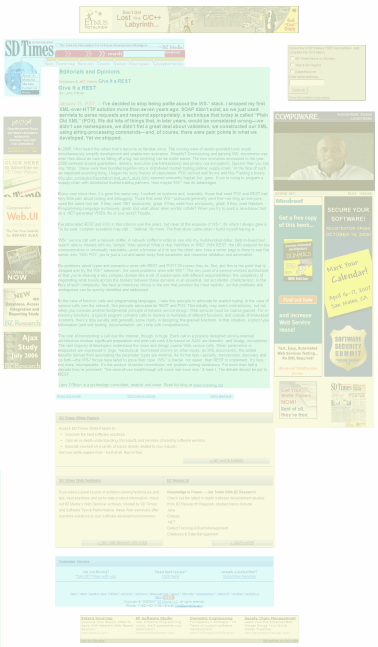 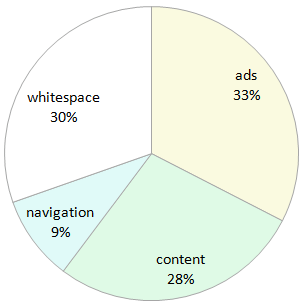 A full third of the page is dedicated to advertising. That's more than the content itself!

I carried a torch for micropayments for years, but it's never going to happen. Ad-supported content appears to be the only sustainible business model on the internet. Clay Shirky has been saying this for years. Just open a web browser and it's painfully obvious that he was right. The web is awash in advertising.

This model, which generates income by making content widely available over open networks without charging user fees, is usually called 'ad-supported content', and it is currently very much in disfavor on the Internet. I believe however, that not only can ad-supported content work on the Internet, I believe it can't not work. Its success is guaranteed by the net's very makeup - the net is simply too good at gathering communities of interest, too good at freely distributing content, and too lousy at keeping anything locked inside subscription networks, for it to fail. Like TV, the net is better at getting people to pay attention than anything else.

Indeed, ad-supported content is the house that AdWords built. It's difficult to criticize a system that works, a system that allows content creators to at least break even on their hosting costs.

We watched the movie Idiocracy this weekend. It's a brilliant bit of social satire from Mike Judge, which (among other things) takes ad-subsidized content to its logical extremes. People wear nothing but clothes plastered with corporate logos. Wallpaper and lampshades are made up of patterns of tiny corporate logos. Every square inch of every imaginable surface is covered with billboards and even more advertisements. 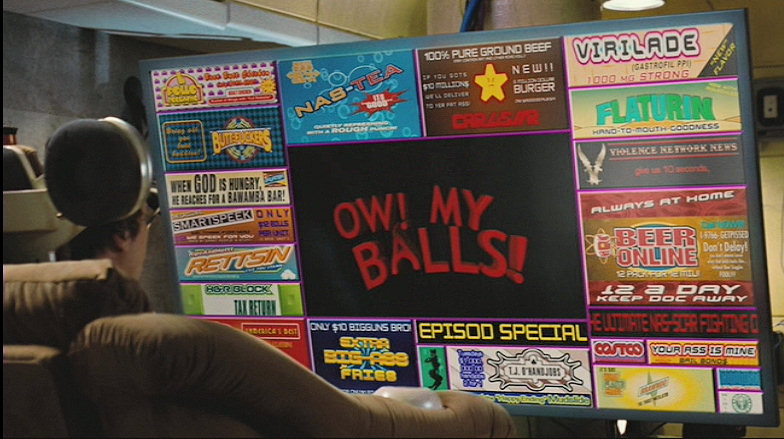 Watching television in Idiocracy bears an unfortunate resemblance to reading that SD Times article. To be fair, Larry's content is a bit more highbrow than "Ow! My Balls!". But it's still a tiny window of content, surrounded by dozens of flashing, animated advertisements. It's a disturbing vision of the future. It's supposed to be funny, but it's uncomfortably close to the experience of reading today's ad-supported internet content. Are we creating a world of endless advertising?