I'd Consider That Harmful, Too

One of the seminal papers in computer science is Edsger Dijkstra's 1968 paper GOTO Considered Harmful.

For a number of years I have been familiar with the observation that the quality of programmers is a decreasing function of the density of go to statements in the programs they produce. More recently I discovered why the use of the go to statement has such disastrous effects, and I became convinced that the go to statement should be abolished from all "higher level" programming languages (i.e. everything except, perhaps, plain machine code).

The abuse of GOTO is, thankfully, a long forgotten memory in today's modern programming languages. Of course, it's only a minor hazard compared to the COMEFROM statement, but I'm glad to have both of those largely behind us. 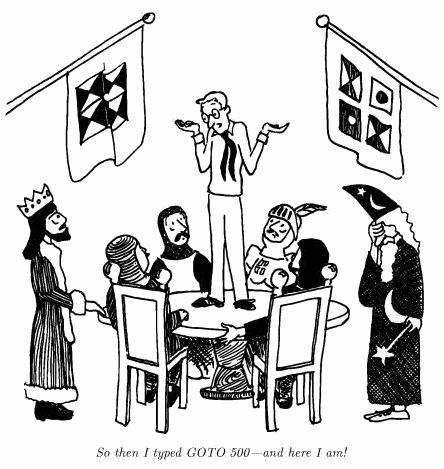 GOTO isn't all bad, though. It still has some relevance to today's code. Along with many other programmers, I always recommend using guard clauses to avoid arrow code, and I also recommend exiting early from a loop as soon as you find the value you're looking for. What is an early Return, or an early Exit For other than a tightly scoped GOTO?

The publication of such an influential paper in this particular format led to an almost immediate snowclone effect, as documented on Wikipedia:

That's easily one of the funniest things I've ever read in Wikipedia. Who says computer scientists don't have a sense of humor? But I digress. Most software developers are probably familiar, at least in passing, with Dijkstra's GOTO Considered Harmful. But here's what they might not know about it:

In other words, Wirth poked and prodded the content until it became incendiary, to maximize its impact. The phrase "considered harmful" was used quite intentionally, as documented on the always excellent Language Log:

However, "X considered harmful" was already a well-established journalistic cliche in 1968 -- which is why Wirth chose it. The illlustration below shows the headline of a letter to the New York Times published August 12, 1949: "Rent Control Controversy / Enacting Now of Hasty Legislation Considered Harmful".

I'm sure it's not the earliest example of this phrase used in a headline or title, either -- I chose it only as a convenient illustration of susage a couple of decades before the date of Dijkstra's paper.

Note that this example is also in the title of a slightly cranky letter to the editor - it's probably not an accident that the first example that came to hand of "considered harmful" in a pre-Dijkstra title was of this type.

So when you emulate the "considered harmful" style predicated on the work of these famous computer scientists in 1968, keep that history in mind. You're emulating a slightly cranky letter to the editor. It's frighteningly common-- there are now 28,800 web pages with the exact phrase "considered harmful" in the title.

There are three primary ways in which "Considered Harmful" essays cause harm.

If you have a point to make, by all means, write a great persuasive essay. If you want to maximize the effectiveness of your criticisms, however, you'll leave "considered harmful" out of your writing. The "considered harmful" technique may have worked for Wirth and Dijkstra, but unless you're planning to become a world famous computer scientist like those guys, I'd suggest leaving it back in 1968 where it belongs.

How To Achieve Ultimate Blog Success In One Easy Step