Does anyone remember the Task List from early versions of Windows? 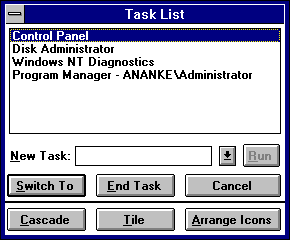 From those humble beginnings comes my all time favorite windows applet, the venerable Task Manager. Task Manager was introduced with Windows NT 4.0, and although it has changed little in the intervening nine years, it hasn't needed to. Unlike virtually every other Windows OS applet of similar vintage** I still use it every day. That's a testament to how well Task Manager was originally designed. 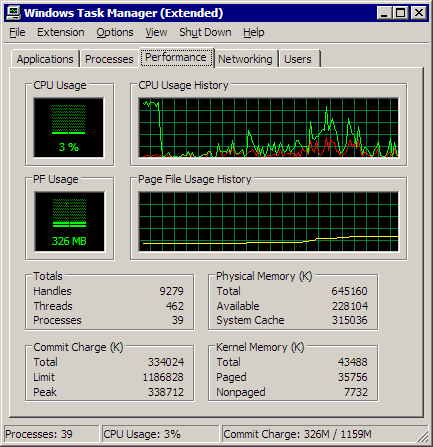 There are a few different ways to launch Task Manager:

Task Manager has a tabbed interface, and there are a few rules applicable to all tabs:

The Processes tab is a list of everything running on your PC, whether it has a visible window or not. I use this tab all the time to scan for processes using a lot of CPU or memory.

The Performance tab is the ultimate "dashboard" tab. If you know what to look for, this tab can tell you everything you need to know about the health of your PC.

The Networking tab is the newest addition to Task Manager, but it's also the most disappointing. 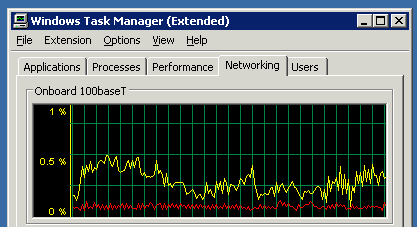 Yeah, there are better task management applications, but you have to admit-- for a nine year old bundled application, ye olde Task Manager is pretty kickass. I took a quick look at Task Manager in the latest pre-beta 2 build of Windows Vista from PDC 2005, and I didn't see any obvious differences. Here's to another 9 years of glorious Task Management!

* the "Shut Down" menu is not shown on the Task Manager window when accessing machines over Remote Desktop. However, you can shut down machines remotely using Ctrl+Alt+End to bring up the Windows Security dialog which has a Shut Down button.

** Charmap or WordPad, anyone? I didn't think so.

In Defense of Verbosity