This guy* who gave a presentation with Patrick Cauldwell yesterday revealed his desktop during the presentation. Here's what it looked like: 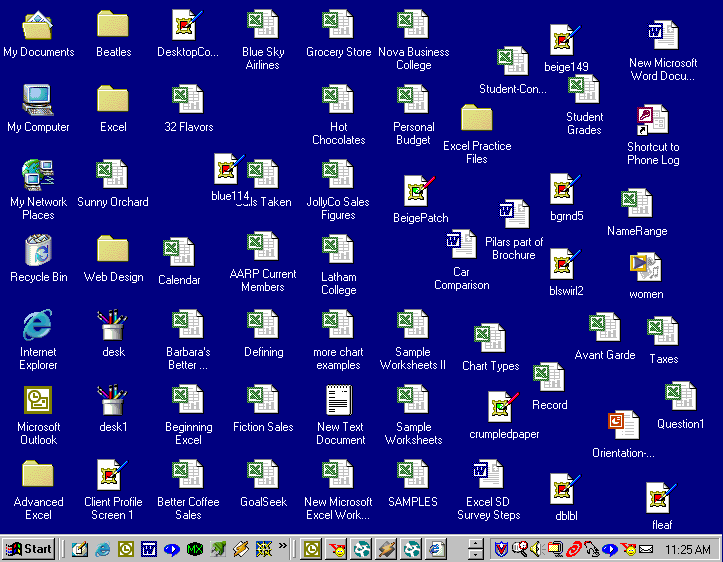 After the presentation, I ribbed him about his desktop. You have a few square millimeters of desktop left uncovered, I said. Clearly you have your work cut out for you.

He said he considers the desktop dead space if it doesn't have something on it. I think his exact words were "make the desktop work for you". That's a unique perspective. It's more of a portal philosophy. Fill the desktop to the brim with tons of stuff that's relevant to you, so it's always at your fingertips.

This made me stop and think a bit.

The desktop is usually dead space, that's true. And dead speace is never useful. But it's not a destination, either. My goal is to never see the desktop. I should always have the task I'm working on front and center, not the desktop. If I need something, I don't want to be forced to press Windows-D to context switch and reveal some links or files sitting on my desktop. That interrupts my task and my flow. I'd rather perform some kind of popup ad-hoc search-- or better yet, use a hotkey-- to get directly to what I want.

The last thing I want is for my desktop to look like the Yahoo home page.

That said, I realize there's no right answer. Some people strive for blank, zen-like desktops, and some people fill their desktop with as many icons, gadgets, and gewgaws as they can possibly jam in there. It's a religious debate, and people get cranky when someone puts peanut butter in their chocolate.

But I still maintain that it's unhealthy to turn the desktop into an artificial destination. It's like the Las Vegas strip; no matter how many zany attractions they add, eventually visitors have to come to terms with the fact that they've arbitrarily chosen to build those attractions in the middle of a vast, inhospitable desert.

* I think his name was gretelman.. something..

How Long Would It Take if Everything Went Wrong?