I sometimes (often, actually) regress a few years mentally and forget to take advantage of new features afforded by the tools I'm using. In this case, we're using the latest and greatest version of C#, which offers implicitly typed local variables. While working on Stack Overflow, I was absolutely thrilled to be able to refactor this code:

It's not dynamic typing, per se; C# is still very much a statically typed language. It's more of a compiler trick, a baby step toward a world of Static Typing Where Possible, and Dynamic Typing When Needed.

This may be a cheap parlor compiler trick, but it's a welcome one. While writing C# code, I sometimes felt like I had entered the Department of Redundancy Department. 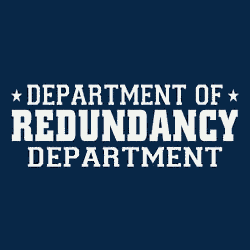 Sure, there are times when failing to explicitly declare the type of an object can hurt the readability and maintainability of your code. But having the option to implicitly declare type can be a huge quality of life improvement for everyday coding, too.

There's always a tradeoff between verbosity and conciseness, but I have an awfully hard time defending the unnecessarily verbose way objects were typically declared in C# and Java.

Who came up with this stuff?

Is there really any doubt what type of the variable br is? Does it help anyone, ever, to require another BufferedReader on the front of that line? This has bothered me for years, but it was an itch I just couldn't scratch. Until now.

If that makes sense to you, why not infer more fundamental data types, too?

I use implicit variable typing whenever and wherever it makes my code more concise. Anything that removes redundancy from our code should be aggressively pursued -- up to and including switching languages.

You might even say implicit variable typing is a gateway drug to more dynamically typed languages. And that's a good thing.