Are You a Digital Sharecropper?

Will Work for Praise: The Web's Free-Labor Economy describes how many of today's websites are built by the users themselves:

It's dawn at a Los Angeles apartment overlooking the Hollywood Hills. Laura Sweet, an advertising creative director in her early 40s, sits at a computer and begins to surf the Net. She searches intently, unearthing such bizarre treasures for sale as necklaces for trees and tattoo-covered pigs. As usual, she posts them on a shopping site called ThisNext.com. Asked why in the world she spends so many hours each week working for free, she answers: "It's a labor of love."

This raises some disturbing parallels. Are users being turned into digital sharecroppers?

MySpace, Facebook, and many other businesses have realized that they can give away the tools of production but maintain ownership over the resulting products. One of the fundamental economic characteristics of Web 2.0 is the distribution of production into the hands of the many and the concentration of the economic rewards into the hands of the few. It's a sharecropping system, but the sharecroppers are generally happy because their interest lies in self-expression or socializing, not in making money, and, besides, the economic value of each of their individual contributions is trivial. 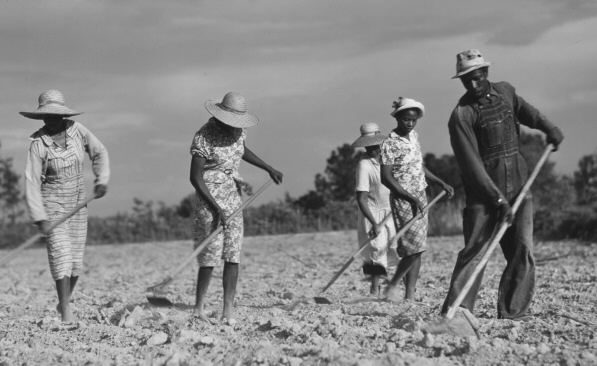 It's only by aggregating those contributions on a massive scale - on a web scale - that the business becomes lucrative.

In essence, any website where user generated content is the website, that is also a for-profit business (not a non-profit organization, ala Wikipedia) — is effectively turning their users into digital sharecroppers. Digital sharecroppers typically get nothing in return for the content they've provided, and often give up all rights to what they've created. At least a real world sharecropper would get to keep a percentage of the crops produced on the land.

The tone of the relationship between virtual land owner and so-called digital sharecroppers is critical. When crowdsourcing goes sour, there can be mass revolts.

Wikia is a for-profit corporation launched by several high level people involved with Wikipedia, such as co-founder Jimmy Wales. Wikipedia has no significant financial connection to Wikia. But an enormous publicity benefit accrues to Wikia due to Wikipedia's fame: $14m of venture capital has been invested in Wikia. Its business model is to have a "community" (writers who work for free) to build a wiki website about a topic, and then to sell advertising on those pages. In short, Wikia hosts sites in return for all the ad revenues.

At the start of June, Wikia's CEO announced that many changes would be made to the appearance of sites, mainly to have more advertising and for the ads to be more prominent. As Wikia's community development manager put it: "We have to change things in order to make Wikia financially stable. Unfortunately, Google ads in the footer pay pennies a click, and nobody clicks". He went on to explain that ads paying based on view count were needed. And that type of advertiser wants their ad to be displayed where viewers are sure to see it, such as within an article, near the top.

In reaction, various content creators made it clear they understood the needs of the company and had no objection to advertising per se. But putting ads inside content risked changing their material from articles into decorated billboards. The conflict between management and (unpaid) labour became acrimonious. There were declarations such as: "If Wikia does not resolve this situation to our satisfaction, then we will leave, taking our content, our communities' inward links, our established service marks and our fellow editors with us."

This is a topic that I've spent a great deal of time thinking about, because we happen to run a site chock full of user generated questions and answers. The last thing I want to do is exploit Stack Overflow users for corporate gain, even accidentally. That's horrible.

So if you spend a lot of time creating content on someone else's website — whether it's Stack Overflow, or anywhere else on the internet — you should be asking yourself some tough questions:

There should always be a healthy, reciprocal relationship between you and any websites you're contributing to. I like to think that Stack Overflow gives back to the community as much as it absorbs — both in the form of Creative Commons shared ownership of the underlying data, and the strong emphasis on showing off the individual skills and knowledge of your fellow programmers.

Ultimately, you have to decide which is more important — building your own brand, or building the brand of the website you're contributing to? While these two concepts are not necessarily opposed, I strongly urge everyone reading this to err on the side of building your own brand whenever possible. Websites tend to come and go; the only sensible long term strategy is to invest in something that's guaranteed to be around for the rest of your life: you.

But I guess I'm biased.