A Lesson in Apple Economics

A new in box Apple //c system was recently sold on eBay. This is quite remarkable; a vintage computer-- twenty-three years old-- that has never been opened. The people who ultimately won the auction posted a beautiful set of unboxing pictures. For a brief moment, it was 1984 all over again.

On Thursday night, Kathryn and I unboxed my latest eBay acquisition: an Apple //c. There are many vintage Apple II computers available for auction, but this one is special: It's never been opened. Ever. It hasn't seen the light of day since before it was shipped on May 5th, 1988. 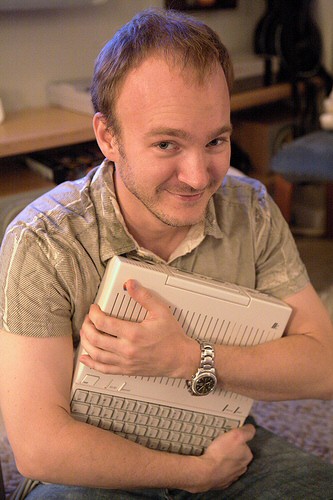 I wrestled with whether I should open the box, or store it and let it accrue collector's value. In the end, I decided that the reason for my purchase wasn't financial. My very first computer was an Apple //c, and I can't see wanting to part with this computer, ever.

It also happens to be the first model of Apple computer I ever owned, so the nostalgia is pretty intense for me, too. The owner paid $2,553 for the the privilege of owning and unboxing this Apple //c. Another vintage computer enthusiast expressed some dismay over the final price:

When I encountered the auction there were 31 minutes left and the bid was at $920. Too rich for my blood these days, sadly. But I was racked with pain in being unable to bid. I felt a little better when I saw the final auction ending price.... $2,553.00. To lend some perspective, back in 1984 the retail price of the Apple //c main unit was $1299. A rare find that went for a rather exorbitant amount.

It wasn't until the Macintosh line was introduced that Apple products got exorbitantly expensive. The original 1984 128k Mac model was $2,495, and the 1985 512k Mac was $2,795. Expressed in 2007 dollars, that's $5,100 and $5,700 respectively. Like all young geeks, I was instantly enamored with the advanced capabilities of the Mac line, but it was financially beyond the reach of my family. I'm not sure I knew anyone that owned one of the original Macs; that's how far outside the realm of possibility they were, at least in the social circles we moved in. Instead of upgrading from an Apple // to the prohibitively expensive Mac series, I convinced my family to buy me an Amiga 1000 for $1,295 in 1985. Even with the 256 KB memory upgrade and the color monitor, it ended up being about the same price as an Apple //.

So I guess this is my point: many pundits forget how expensive Macs really were in the 80s and early 90s. For a very long time, Macs were the exclusive province of the upper middle class. It wasn't until Jobs returned in 1997, and Macs began adopting more and more commodity PC technology over time-- culminating in Apple's reluctant 2005 adoption of Intel CPUs-- that pricing parity was eventually restored. Today's Macs are quite competitively priced, largely because they are (well designed) commodity PCs.

Get Your Database Under Version Control