Jakob Nielsen's new book, Prioritizing Web Usability, is a worthy companion to the previous two. Now it's a trilogy:

You can tell Jakob and his co-authors are growing ever more skilled at the practice of simplicity; this book is the first in the series to drop the colon and subtitle. 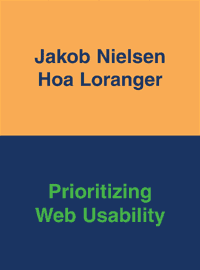 The very existence of the new, updated book hints that usability guidelines evolve over time. In one of the first chapters, Nielsen makes this explicit by revisiting earlier web usability issues to see how much they've improved in seven years. Each usability issue is rated from zero to three skulls to indicate how severe the problem is today:

2. Usability issues that are less important due to improvements in technology

3. Usability issues that are less important because users have adapted to the web

4. Usability issues that are less important because designers have learned restraint

When comparing the severity of these 34 usability issues with their historical severity in 2000, Nielsen notes that most of the progress can be attributed to designers learning restraint:

Relying on user education or technology fixes to address usability issues means you'll be waiting a long time. Most of the immediate benefits are realized by designers who learn to follow usability guidelines. But designers are fallible, too, so there's no guarantee these problems won't crop up again later, or in slightly different forms.

The data presented in Prioritizing Web Usability shows that usability guidelines do evolve over time, but slowly. It also illustrates how the core principles of usability are timeless:

From 1984 to 1986, the U.S. Air Force compiled existing usability knowledge into a single, well-organized set of guidelines for its user interface designers called Guidelines for Desigining User Interface Software, ESD-TR-86-278 (also available as a pdf). Jakob Nielsen was one of several people who advised the undertaking. The project identified 944 guidelines, most of them related to military command and control systems built in the 1970s and early 1980s, which used mainframe technology.

You might think that these old findings would be irrelevant to today's designers. If so, you'd be wrong. As an experiment, we retested 60 of the 1986 guidelines in 2005. Of these, 54 continue to be valid today. Of the total 944 guidelines, we deduced that 10 percent are no longer valid and 20 percent are irrelevant because they relate to rarely used interface technologies. But nearly 70 percent of the orginal guidelines continue to be both correct and relevant 20 years later.

This is one of the reasons I urge software developers to study and understand the principles of usability. It's one of the precious few bodies of knowledge in a developer's toolkit that will still be useful twenty years from now.

The Pernicious Issue of Software Patents

Is Amazon's Mechanical Turk a Failure?