The Visual Studio IDE supports searching and replacing with regular expressions, right? Sure it does. It's right there in grey and black in the find and replace dialog. Just tick the "use Regular expressions" checkbox and we're off to the races. 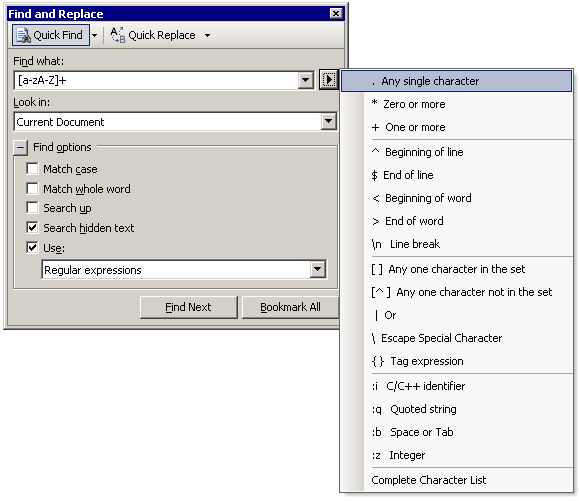 However, you're in for an unpleasant surprise when you attempt to actually use regular expressions to find anything in Visual Studio. Apparently the Visual Studio IDE has its own bastardized regular expression syntax. Why? Who knows. Probably for arcane backwards compatibility reasons, although I have no idea why you'd want to perpetually carry forward insanity. Evidently it makes people billionaires, so who am I to judge.

God forbid we all learn one standard* regular expression dialect.

At any rate, some of the Visual Studio IDE regular expressions look awfully similar to standard regex:

But they certainly don't act related when you try to use them. For example, try something simple, like finding "[A-Za-z]+". That's all occurrences of more than one letter in a row. When I try this via the Visual Studio find dialog with the regex option checked, I get positively bizarre results. It finds a word made up of all letters, true, but as I click "Find Next", it then finds each subsequent letter in the word. Again. What planet are these so-called "regular expressions" from?

The semi-abandoned Microsoft VSEditor blog has a three part tutorial (part one, part two, part three) on using the crazy Visual Studio dialect of Regex. There's a lot of emphasis on the strange < and > begin/end word match characters, which have no equivalent that I know of in the .NET and Perl dialect of regular expressions.

You might say that searching with regular expressions is such an extreme edge condition for most developers that it's not worth the Visual Studio development team's time. I won't disagree with you. It is rare, but it's hardly esoteric. Every developer should be able to grok the value of searching with the basic regular expressions that are a staple of their toolkit these days. Heck, some developers are so hard core they search through their code with Lisp expressions. Basic regex search functionality is awfully mild compared to that.

To be honest, searching with regular expressions isn't a common task for me either. But I'd be a lot more likely to use it if I didn't have to perform a lot of mental translation gymnastics on the occasions that I needed it. Don't make me think, man. But there is hope. There's a free add-in available which offers real regular expression searching in Visual Studio.