The Story of SkiFree

Laurent Bourgeois sent in an amusing link to the story of SkiFree in the words of Chris Pirih, the original Microsoft programmer who wrote it:

I wrote SkiFree in C on my home computer, entirely for my own education and entertainment. One day while I was playing with it at work, the program manager for Windows Entertainment Pack happened to look over my shoulder and immediately decided he had to have this game. I called it WinSki, but the Microsoft marketroids hated that and decided, for inscrutible marketroidal reasons, to call it SkiFree. After some token resistance I let them have their way. Since the program was not originally a Microsoft product, Microsoft licensed it from me and paid me some trivial one-time fee (something like 100 shares of MSFT stock, no royalties) for its use.

SkiFree was intended to run on a 386 PC with VGA display. Such computers were not very powerful, nothing like modern PCs that can do 3-D rendering at millions of textured polygons per second.... No, in those days there wasn't even any such thing as a "video accelerator" -- the VGA was just a dumb pixel buffer hanging off the excruciatingly slow ISA bus. This made it pretty challenging to get good performance out of even simple sprite-oriented animation! Windows didn't help matters any by introducing several layers of abstraction between the program and the video hardware.... I discovered that it was worth almost any amount of preprocessing (on the "fast" 386 CPU) to reduce the amount of video I/O (over the slow ISA), so I designed a fairly clever algorithm to combine overlapping objects/erasures and blt minimal regions in each frame. The result was perfectly flicker-free transparent sprite animation at reasonable speed even on very slow computers, such as an old 286/EGA machine I found in the testing lab. Nowadays one would probably just render the sprites back-to-front in a memory buffer and blt the entire window on each frame.

Chris kindly provides an updated 32-bit version of SkiFree on his page as well.

I definitely remember SkiFree from the Windows Entertainment Pack. What's particularly scary is that many of these games have their own highly detailed Wikipedia pages already-- including a page on SkiFree. The infinite monkeys have been busy! 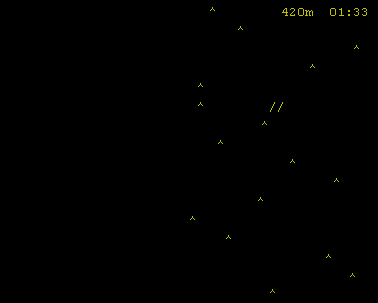 And it was influenced by Activision's Atari 2600 Skiing cartridge: 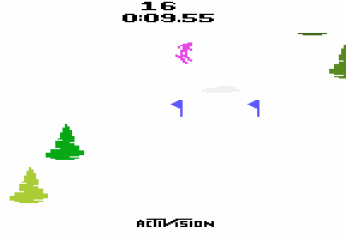 Which brings us to the venerable SkiFree-- Windows 3.0 gaming at its finest. 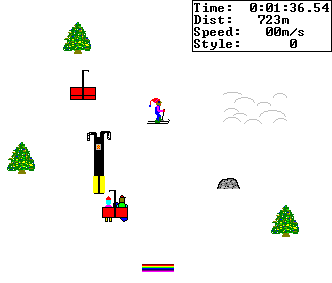 Variable Bit Rate: Getting the Best Bang for Your Byte