The Problem With Code Folding

When you join a team, it's important to bend your preferences a little to accommodate the generally accepted coding practices of that team. Not everyone has to agree on every miniscule detail of the code, of course, but it's a good idea to dicuss it with your team and decide on overall approaches and philosophy beforehand. It promotes team harmony, and more than that, it's just common courtesy. As they say, when in Rome, do as the Romans do.

I've always been wary of cowboy coders who rolled into an ongoing project on fresh horses and immediately started dictating terms. It's a very short trip indeed from there to Who Wrote This Crap, and the predictable, inevitable finger-pointing at the foolhardy programmers who came before you begins. Don't be that guy or gal. Work with your team, not against it.

Still, there are some coding preferences people may feel.. strongly.. about. If that's the case, try to clear the air and address those strong preferences up front, as early as possible. Don't let them simmer. For me, the use of #region is one of those things. I tried to make myself clear in this twitter message:

So what is #region? It's a named hint you place in C# or VB.NET code to set a code folding point. Any code placed inside that region is, by default, collapsed when you re-open it in the editor. Here's a random example from the Log4Net project: 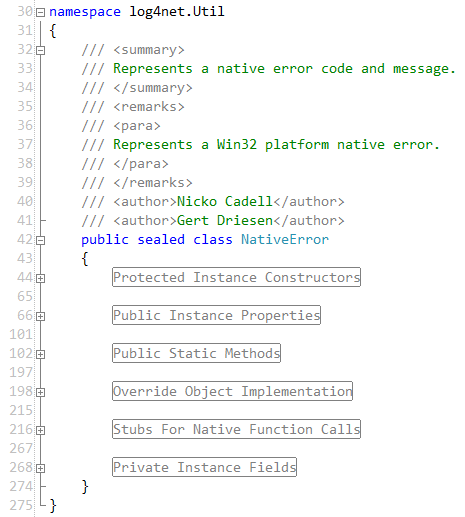 Immediately I have a problem: I can't see anything! I have to manually expand those sections to browse any of the code in this class. It is possible to configure the Visual Studio IDE to not fold any of the regions when files are opened, but this is the out of box behavior, so that's what most developers will see. And of course there are keyboard shortcuts to deal with the regions:

Here's the really sick part: once you expand the above log4net code there's literally three pages worth of code there! After you strip out all the massive XMLDoc comments and the dozen or so #region directives, you could have had all the code at your fingertips with a minor flick of the mouse wheel, in a simple scrollable layout.

The #region directive drives me bonkers. It's not evil, per se, but I feel it is criminally overused in practice and heavily prone to abuse. I strongly urge you to think about how you're using code folding, because as I see it, there are a lot of downsides:

I urge developers to write code that doesn't need folding to be readable, clear, and concise. I'm sure there are sane uses for code folding out there somewhere, but I rarely see them.

Investing in a Quality Programming Chair