From Engadget's review of the iRiver H10:

So the first thing we noticed about this player when we opened it up was, unfortunately, a huge orange flyer [..]

From Larry Osterman's review of the iRiver H10:

My concerns started when I opened the box. To the left of the H10 was a plastic bag with the manual etc. On the top of the plastic bag, plain to see was a bright orange piece of paper with: 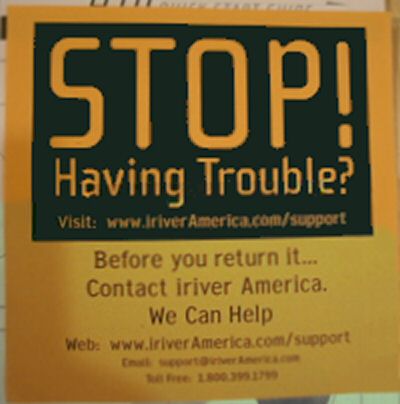 Do you really want your user's out of box experience to be a bright orange warning sign that screams STOP! and Having Trouble? That negative first impression sets the tone for the rest of the device's life. It's all downhill from there.

It's details like this that drove Omar back to the iPod. But that's a natural consequence, as Omar points out, of the business model: Apple owns the device, the software, and the music licensing. They control the entire experience. Nobody can screw that up behind Apple's back.

Now compare that with the out of box experience of the new Lenovo T60 Thinkpad we received at work today. This is the taskbar after the machine has literally been booted for the first time:

The operating system is loaded down with so many pre-installed craplets that the taskbar takes up half the screen. The hardware is excellent, but you'd never know that based on the abysmal software experience you're about to have. And that's just the taskbar! Take a look at the full desktop screenshot. It's even worse.

Is it any wonder that I recommend people wipe their systems as soon as they receive them and perform a clean install of Windows XP SP2? If I've learned anything about computers in the last 35 years, it's this: if you leave the user experience up to third parties, they will screw it up behind your back. Royally. Every single time.

That's why I'm encouraged by the Windows Media Center team's insistence that they tightly control the core user experience. As Charlie Owen explained to me at MIX06, third parties can create all the external add-ins they want, but they can't mimic the Media Center UI, and they definitely can't muck around with the core functionality of Media Center.

I Shall Call It.. SomethingManager