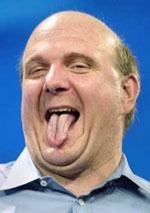 A colleague recently pointed me to a Steve Ballmer video I hadn't seen before; the one where he pitches Windows 1.0. All three of the Ballmer videos are essential viewing for any Windows developer:

I love the fact that Steve Ballmer is a billionaire 12 times over, and yet he isn't afraid to get up on stage and make a complete and utter ass out of himself. You have to respect a man with that much unbridled enthusiasm. I certainly can't see staid, boring old Michael Dell dancing around on stage, screaming about how much he loves his company at the top of his lungs. Steve Ballmer is unique:

Steve Ballmer can be so zealous in expressing his enthusiasm that once his vocal cords required surgery after he screamed "Windows, Windows, Windows" continuously at a Japan meeting in 1991. When Microsoft celebrated its 25th Anniversary in 2000, CEO Ballmer popped out of the anniversary cake to surprise the audience. His wild screaming and dancing on stage at an employees convention was caught on a widely-circulated video known as "Dance Monkeyboy." A few days later at a developers conference, a sweat-soaked Ballmer repeatedly chanted "developers" at least 14 times in front of the bemused gathering. Beyond his jovial image, this second cousin of famous comedian Gilda Radner is known to be a shrewd businessman with a flair to grab opportunities when they come.

Ballmer has also called Linux "communism" and the GNU GPL "a cancer". He advocates Digital rights management and has said that "DRM is the future."

Linux may have Tux, but we've got Ballmer. Pudgy cartoon penguin versus sweaty screaming billionaire? C'mon. That's not even close.

What if it was infinitely fast?