I recently built a new, much lower wattage home theater PC using the Pentium-M processor. The P-M was, until very recently, a mobile-only part. And that's why it's ideal for HTPC duties-- it offers very high levels of performance at an astonishingly modest power draw. For example, per these system power consumption measurements at Tech-Report:

So the P-M system consumes 35% less power at idle and 97% less power at load-- while offering comparable performance. The Pentium-M is much more efficient per clock, so it doesn't need to run at exorbitant clock rates. There's a direct correlation between power consumption and heat/noise. The cooler a system runs, the quieter it will be. And quiet is what you want for a HTPC.

In my bench testing of the Pentium-M 1.6ghz, the large, fanless Alpha heatsink never exceeded 50c under Prime95 torture test load, even when left running overnight. And that's totally passive, with virtually zero directed airflow! Try that with a Pentium 4 and you'll create your own personal China Syndrome. Because the P-M runs so cool, I was able to get away with using only two fans in the final system-- the power supply fan, and a dramatically undervolted 60mm exhaust fan: 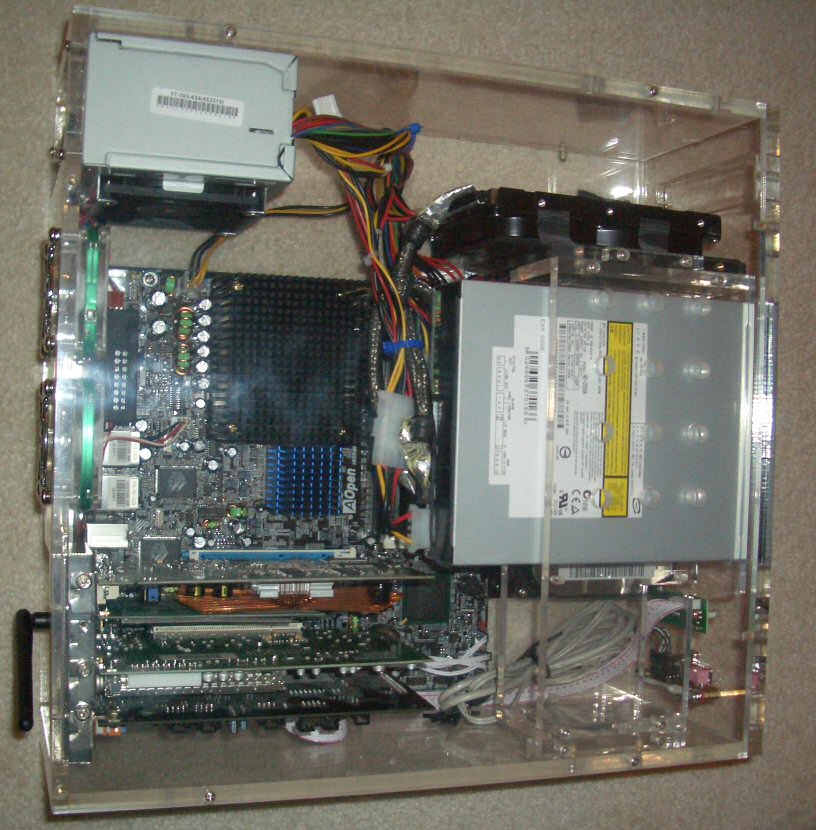 See the three hard drives in there? Two are mounted under the DVD-R. Here's a breakdown of all the parts.

The AOpen mobo offers voltage and bus speed controls; I undervolted the P-M from ~1.3v to ~1.1v, and overclocked it to 1.7ghz. This system, as measured by my trusty Kill-a-Watt, consumes 72w at windows desktop and 81w in Prime95 torture test. Now, that's power draw from the wall; due to inefficiencies in all power supplies, some of that power is immediately lost as conversion heat inside the PSU. A typical power supply is about 70 percent efficient, so the actual power consumption inside the PC is closer to 50w idle / 57w load. Pretty amazing for a fully loaded 1.7ghz PC that performs like a Pentium 4 2.6ghz.

When building a quiet PC, pay close attention to the hard drives and video card you use: