I've been a PC racing game enthusiast since the day I wrapped my hands around my first force-feedback wheel in 1999-- the classic wire driven Logitech Formula Force. There's something about a quality steering wheel with physics-driven force feedback effects that really delivers on the sensation of driving.

I spent many hours tooling around the tracks in Viper Racing and Sports Car GT. These games had a great combination of physics and force feedback. Nothing turns me off faster than arcade driving games where you pilot a rubbery box around a track, bouncing off walls and fellow motorists with impunity. What's the point of fantasy driving without some semi-realistic risks? But that doesn't mean I'm a Grand Prix Legends masochist, either. Those guys are nuts:

When the creators of the ever-popular NASCAR series of racing simulations, Papyrus, decided to create a historical Grand Prix racing simulation, many people were confused. "How could a racing simulation modeled after the 1967 Formula 1 Season be fun?" they asked. To put it bluntly, it's fun because it is harshly and at times brutally realistic.

With few of the safety features and engine restrictions required on today's race cars, the 1967 Formula 1 season was one of the most dangerous in Motorsports history. Increased horsepower, no down force, rock-hard bias-ply tires, fuel tanks placed not only in the cockpit with the drivers, but specifically fabricated and molded in such a way as to surround the driver, and seat belts... what were those? The conventional wisdom in those days was that it was better to be thrown from the car during an accident than be belted into it. Considering the drivers were actually sitting in the middle of a 40 plus gallon, thin-walled, aluminum fuel tank filled with very exotic and volatile fuel, who could blame them?

I've gone through a succession of force feedback wheels since then, finally settling on the excellent Logitech MOMO Force. 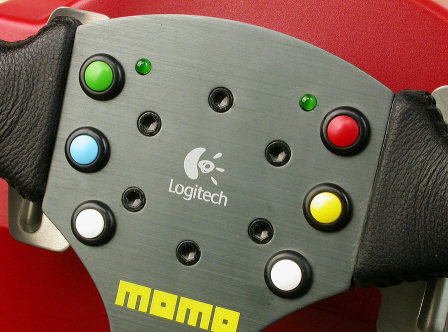 Unfortunately, this particular model isn't available any more. But the more recent Logitech Momo Racing Force wheel is similar and highly recommendable. And that's just the tip of the iceberg. Here's a comprehensive wheel roundup to get you started. As with all things PC, there's lots of esoterica available, such as the ECCI Trackstar 6000.

Of course, a nice wheel isn't doing me any good if it's collecting dust. Although I dabbled a little bit with Colin McRae Rally 2004, I haven't been following the PC driving sim scene very closely for the last few years. Over the holiday, though, I had some time to really immerse myself. And I found some outstanding next-generation racing sims:

Unfortunately, I also found that most of the racing games I'm interested in are barely released in the US any more. I suppose it's the NASCAR factor. Or maybe europeans are just more enthusiastic about motorsports as a whole. For example, rally racing-- which I find hugely entertaining-- barely even registers as a sport in the US. Searching for the word "rally" on the EB Games website produces 30 hits on mostly NASCAR titles. Irony of ironies. Racing in a circle is about the farthest thing imaginable from rally racing. The only title in my list that's currently available from EB Games is GTR. You'll have to scour eBay or Froogle, like I did, for the others.

One of the downsides of having a dedicated wheel peripheral is the extra work it takes to lug it out and hook it up before you play. The temptation to play racing games with the keyboard-- even though it sucks for controlling driving games-- is strong. I played through most of Colin McRae Rally 2004 on the keyboard in between coding sessions for this very reason. I was too lazy to drag out the wheel then put it away when I was done! I enjoy racing games too much to let this happen again. What I really need is a dedicated PC racing rig. 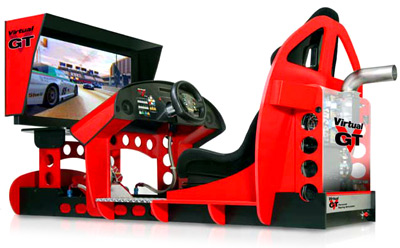 I'll keep this in mind for the gaming wing of my mansion. In the meantime, some humbler but more realistic choices:

The Hotseat is my pick of this litter, but after you factor in shipping, it's close to $750. Whereas I can get the Playseat for $249 at Target. Even with shipping and tax, that's less than one Xbox 360! 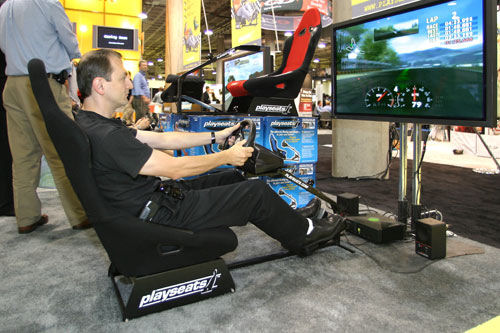 At some point I'll probably kit it out with the optional LCD bracket advertised on the playseat website, and some rear speaker stands. I can make it as temporary or permanent as I need to. But it's definitely getting some screen time in the giant Vertigo conference room first.