I'm a big fan of Twitter. The service itself is nothing revolutionary; it's essentially public instant messaging. But don't underestimate the power of taking a previously siloed, private one-to-one communication medium and making it public. Why talk to one person when you could talk to anyone who happens to be interested in that particular topic? Granted, there are plenty of topics that should only be discussed in private. But in my experience, those are the exception, not the rule. You should always try to maximize the value of your keystrokes.

However, instant messaging, even the public kind, still has its limitations as a communication medium. Consider this exchange between Phil Haack and Scott Bellware. I follow Phil on Twitter, but not Scott, so one side of this conversation (and note that this is just a partial fragment) showed up in my Twitter stream. 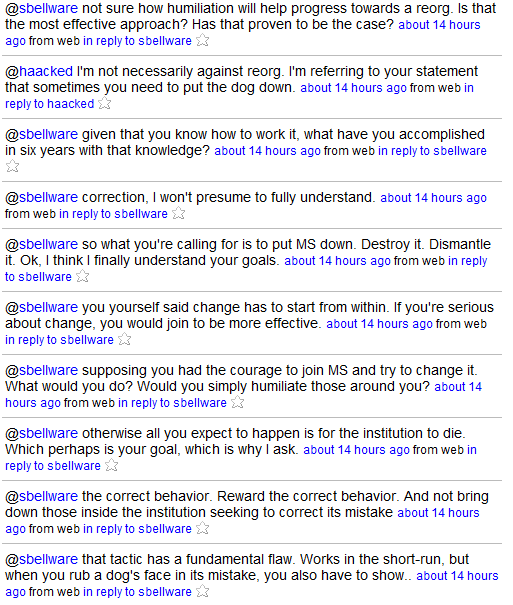 I'm bringing this up because I've made the very same mistake with instant messaging – having an intense, extended conversation long after it should have been beyond obvious to any observer that I needed to escalate the discussion to a more appropriate communication medium.

Let me be completely honest with you – I'm actually sugar coating this a bit. I would get into knock down, drag out fights over IM where I became physically angry. And for what? If I had taken the time to walk over to my coworker's desk or call him on the phone, this "argument" could have been defused in a sane, rational way, with no hurt feelings or residual anger on either side.

Because I abused instant messaging, because I wasn't brave enough to address the serious limitations of instant messaging as a communication medium, I ultimately hurt myself. And other people. It's all so… unnecessary.

Please don't make the same mistake I have. Understand the limitations of the communication medium you are using and know when to escalate to another, more appropriate one.

Email is no different. Take it from Getting Things Done guru, David Allen:

One of the problems that's endemic with the younger generation people who have grown up with computers and with email they make the assumption that email is a fine medium for communicating anything and everything.

But one of the things we've learned is that if you try to communicate something that requires a broader bandwidth of communication, in other words I actually really need to see what you look like when I say something and how you respond to it. Otherwise you might very easily misunderstand what was going on.

For people that are trying to do strategic or sensitive or complex things through email and it's the wrong pipe to be using, that's very easy to blow a fuse. In terms of the stress, the misunderstandings, the conflict, the sort of lack of fulfillment or lack of getting a result that may occur because of it. [It's] a factor with anybody who assumes that email is the communication media of choice.

I'm not going to tackle the subject of email etiquette or the much sketchier topic of instant messaging etiquette – if there even is such a thing. It's murky, nebulous, and complicated. Just be civil to each other and treat people's time as the precious commodity it is, even if they don't realize it.

Understand the strengths and weaknesses of the particular communication medium you've chosen. Don't doggedly pursue the same method of communication when you've clearly outgrown it. They do not stretch to fit.

Know when to escalate from IM to email, from email to phone, and when to drop the ultimate communication A-bomb: a face-to-face meeting. Sometimes people are hesitant to escalate communications even when it's painfully obvious that they should. Resist the urge to reply in kind, however tempting it may be. You'll both have a more productive conversation when one of you finds the wherewithal to escalate to "let's take this to email", "let me call you", or even "let's meet for coffee".