I have a great deal of respect for Apple's iPod juggernaut. They've almost single-handedly legitimized the market for downloadable music. The kind you pay for. The kind that, at least in theory, supports the artists who produce the music instead of ripping them off.

That said, I have some problems with the iPod.

Now, your goals may not be my goals. But when my wife wanted a new music player to replace her aging Rio Carbon (RIP-- a great little player for its time), these are the criteria I used to evaluate them.

Unfortunately, music devices that can be used seamlessly and interchangeably as a generic external USB hard drive and digital music player are quite rare. The sole exception, at least for hard-disk devices, is the Cowon X5L. The Cowon is a decent player, but it suffers from Soviet Russia-era design aesthetics. Due to lack of choices, I was forced to compromise on devices that support Microsoft's Media Transfer Protocol. When connected to a Windows XP or Windows Vista machine, MTP support allows you to drag and drop music directly on to the device-- without installing any software. It's not ideal, since it's tied to Microsoft, but it's the best I can do.

The Digital Audio Players Review website had the most helpful advice. Their top pick was the Creative Zen Vision:M. I agreed, so I went with the pink one. You know, for the ladies.

It's a great little device, and as promised, we just dragged and dropped our music on it-- which happens to be a mix of MP3 and WMA files. And it worked with our Yahoo Music Unlimited subscription as well.

To complement the 30gb hard drive player, I also picked up a flash device-- the new, larger 4gb iRiver Clix. 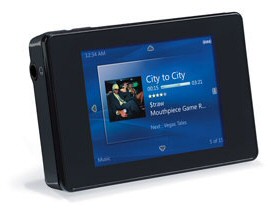 I've owned a few iRiver products in the past and they've always been excellent. dapreview gave the Clix high marks, and so has everyone else who has reviewed it. The feature set is great. It meets every one of my criteria, throws in video support, and even goes a little beyond with support for Flash Lite games.

I respect the way the pioneering iPod has collectively led the industry out of the dark Napster ages. And I like the iPod design. But until Apple at least supports subscription services and the WMA/FLAC/OGG file formats, I can't justify purchasing any iPod hardware.