As a technology enthusiast with a bad impulse purchase habit, I'm unrepentantly difficult to buy gifts for. The way I figure it, the only reason to grow up is so you can afford to buy yourself all the crap your parents wouldn't buy you when you were a kid.

That said, here are some of my favorite lists of cool, quirky, offbeat geek gifts for 2006:

This year, I preemptively treated myself to a the new 4 gigabyte iRiver Clix ($199), and after living with this stellar little flash music player for a week, I can heartily recommend it to anyone. 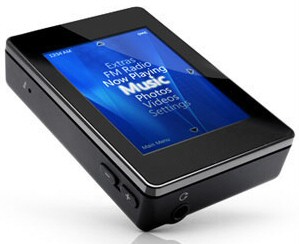 It does everything the iPod refuses to do: subscription services, wma/ogg support, FM Radio (w/recording!), Flash Lite games, video playback, and voice recording. It has a speedy, intuitive UI that can be switched between landscape or portrait mode at will. And best of all, no software installs are required*: just plug it in, drag and drop your music on it, then play. But don't take my word for it: read the glowing critical acclaim at PC Magazine, ABiP, and Cnet.

I've provided one specific gift recommendation, and my favorite geek gift suggestion lists so far. But I'm sure I've missed plenty. Are there any cool geek gift lists I've missed?

* caveat: assuming you have an OS that supports MTP.