ID3 tags describe the metadata for an MP3 file, such as Artist, Album, Track, and so forth. ID3 tags certainly don't look all that complicated. Newer versions appear at the beginning of the MP3 file, and are nearly human readable even in a hex editor:

There's a set of comprehensive ID3 specifications to help us out. Unfortunately the ID3 specs are, in a word, bad.

Even with a bad spec, you can write code to parse ID3 tags. There are a number of CodeProject articles that read and write ID3 tags with varying levels of success. There's also a mature .NET ID3 library available, UltraID3Lib, but unfortunately it's closed source. It also suffers a little from explosion at the pattern factory design.

One of the first big warning signs is this list of ID3 "offenders" on the UltraID3Lib site. It reads like a who's who of music applications: iTunes, WinAmp, Windows Media Player. If the applications that ship with the operating system can't get ID3 tags right, clearly something is wrong.

And that something is the ID3 spec. How does it suck? Let me count the ways:

The ID3 spec is doubly frustrating because it makes a simple topic difficult. ID3 tags are just not that complicated. The spec makes me feel like an idiot for not being able to get this stuff right. What's the matter? Can't you read the spec?

No. I can't. And evidently, neither could the developers of WinAmp, iTunes, or Windows Media Player.

Since the ID3 spec is so deficient, I've been using the behavior of popular applications as a de-facto spec. In other words, I test to see how WinAmp behaves when editing ID3 tags: 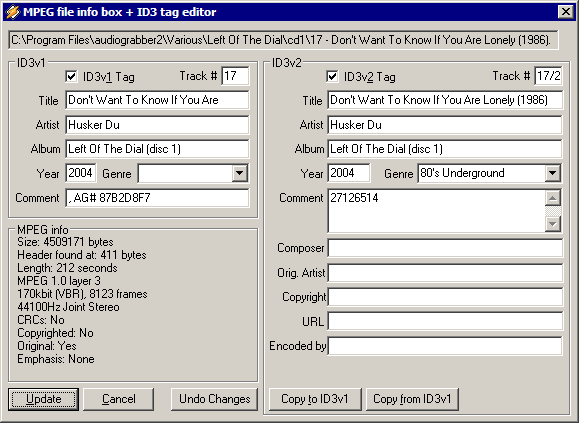 WinAmp isn't a model ID3 tag citizen. It ignores all comments except for the first one, and it adds garbage text as the language string for comments.

I also test to see how iTunes behaves when editing ID3 tags: 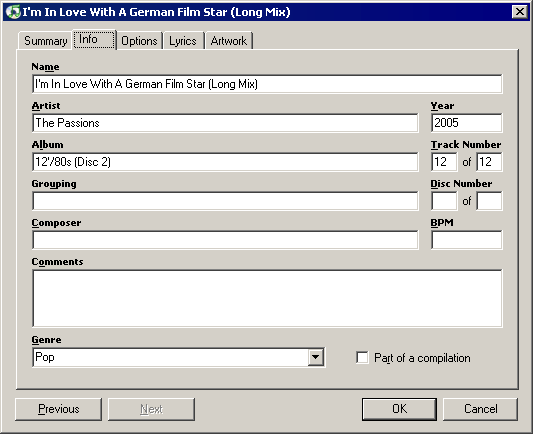 Although iTunes reads all versions of ID3 tags, it still writes ancient v2.2 ID3 tags to MP3 files, even in the latest version. So it's an especially poor role model for tagging.

Warts and all, the practical implementations of ID3 tags in popular applications like WinAmp and iTunes trump anything that's written in the formal ID3 spec. I finally understand what Linus Torvalds was complaining about:

A "spec" is close to useless. I have never seen a spec that was both big enough to be useful and accurate. And I have seen lots of total crap work that was based on specs. It's the single worst way to write software, because it by definition means that the software was written to match theory, not reality.

Specs, if they're well-written, can be useful. But they probably won't be. The best functional spec you'll ever have is the behavior of real applications.

My Love/Hate relationship with ClearType