After we created Stack Overflow, some people were convinced we had built a marginally better mousetrap for asking and answering questions. The inevitable speculation began: can we use your engine to build a Q&A site about {topic}? Our answer was Stack Exchange. Pay us $129 a month (and up), and you too can create a hosted Q&A community on our engine – for whatever topic you like!

Well, I have a confession to make: my heart was never in Stack Exchange. It was a parallel effort in a parallel universe only tangentially related to my own. There's a whole host of reasons why, but if I had to summarize it in a sentence, I'd say that money is poisonous to communities. That $129/month doesn't sound like much – and it isn't – but the commercial nature of the enterprise permeated and distorted everything from the get-go.

(fortunately, the model is changing with Stack Exchange 2.0, but that's a topic for another blog post.)

Yes, Stack Overflow Internet Services Incorporated©®™ is technically a business, even a venture capital backed business now – but I didn't co-found it because I wanted to make money. I co-founded it because I wanted to build something cool that made the internet better. Yes, selfishly for myself, of course, but also in conjunction with all of my fellow programmers, because I know none of us is as dumb as all of us.

I don't care how much you pay me, you'll never be able to recreate the incredibly satisfying feeling I get when demonstrating mastery within my community of peers. That's what we do on Stack Overflow: have fun, while making the internet one infinitesimally tiny bit better every day.

So is it any wonder that some claim Stack Overflow is more satisfying than their real jobs? Not to me.

If this all seems like a bunch of communist hippie bullcrap to you, I understand. It's hard to explain. But there is quite a bit of science documenting these strange motivations. Let's start with Dan Pink's 2009 TED talk.

Dan's talk centers on the candle problem. Given the following three items …

… how can you attach the candle to the wall?

It's not a very interesting problem on its own – that is, until you try to incentivize teams to solve it:

Now I want to tell you about an experiment using the candle problem by a scientist from Princeton named Sam Glucksberg. Here's what he did.

To the first group, he said, "I'm going to time you to establish norms, averages for how long it typically takes someone to solve this sort of problem."

To the second group, he said, "If you're in the top 25 percent of the fastest times you get five dollars. If you're the fastest of everyone we're testing here today you get 20 dollars." (This was many years ago. Adjusted for inflation, it's a decent sum of money for a few minutes of work.)

Question: How much faster did this group solve the problem?

Answer: It took them, on average, three and a half minutes longer. Three and a half minutes longer. Now this makes no sense, right? I mean, I'm an American. I believe in free markets. That's not how it's supposed to work. If you want people to perform better, you reward them. Give them bonuses, commissions, their own reality show. Incentivize them. That's how business works. But that's not happening here. You've got a monetary incentive designed to sharpen thinking and accelerate creativity – and it does just the opposite. It dulls thinking and blocks creativity.

It turns out that traditional carrot-and-stick incentives are only useful for repetitive, mechanical tasks. The minute you have to do anything even slightly complex that requires even a little problem solving without a clear solution or rules – those incentives not only don't work, they make things worse!

Pink eventually wrote a book about this, Drive: The Surprising Truth About What Motivates Us. 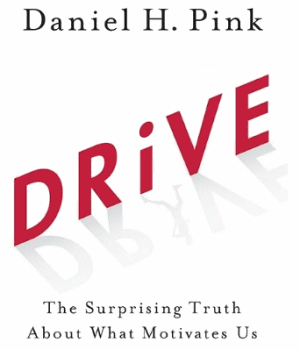 There's no need to read the book; this clever ten minute whiteboard animation will walk you through the main points. If you view only one video today, view this one.

The concept of intrinsic motivation may not be a new one, but I find that very few companies are brave enough to actually implement them.

I've tried mightily to live up to the ideals that Stack Overflow was founded on when building out my team. I don't care when you come to work or what your schedule is. I don't care where in the world you live (provided you have a great internet connection). I don't care how you do the work. I'm not going to micromanage you and assign you a queue of task items. There's no need.

If you want to build a ship, don't drum up the men to gather wood, divide the work and give orders. Instead, teach them to yearn for the vast and endless sea.

Because I know you yearn for the vast and endless sea, just like we do.