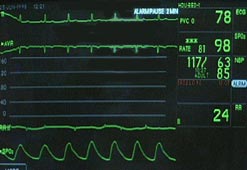 You should start out with a simple pulse-- whether or not your project builds, and how often you're building it. The build server can be so much more, though. The Zutubi article The Path to Build Enlightenment provides a great overview of what a build server can do for your project:

If you don't have a build server on your project, what are you waiting for?