The Bathroom Wall of Code

In Why Isn't My Encryption.. Encrypting?, many were up in arms about the flawed function I posted. And rightfully so, as there was a huge mistake in that code that just about invalidates any so-called "encryption" it performs. But there's one small problem: I didn't write that function.

Now, I am certainly responsible for that function, in the sense that it magically appeared in our codebase one day -- and the the entire project is the sum of all the code contributed by every programmer working on it. I invoke the First Rule of Programming: It's Always Your Fault. And by "your", I don't mean the particular programmer who contributed this code, who shall remain blissfully nameless. I mean us -- the entire team. The onus is on us, as a team, to vet every line of code at the time it is contributed, and constantly peer review each other's code. It's a responsibility we shoulder together. Nobody owns the code, because everybody owns the code.

Yes, I failed. Because the team failed.

The irony in this is that someone will inevitably end up here for sample encryption code and blindly copy/paste your flawed code.

Indeed. Heaven forbid someone copy and paste flawed code from the internet into their project! In fact, a quick search on some of the unique strings in that original Encrypt() function turns up a few ... interesting ... search results.

That's just a sampling of the 131 web hits I got. To paraphrase Austin Powers, this Encrypt() function is like the village bicycle: everybody's had a ride. It's a shame this particular bicycle happens to have a crippling lack of brakes that makes it dangerous to ride, but what can you do.

Scott Hanselman coined a nice phrase for this: the internet as the bathroom wall of code. 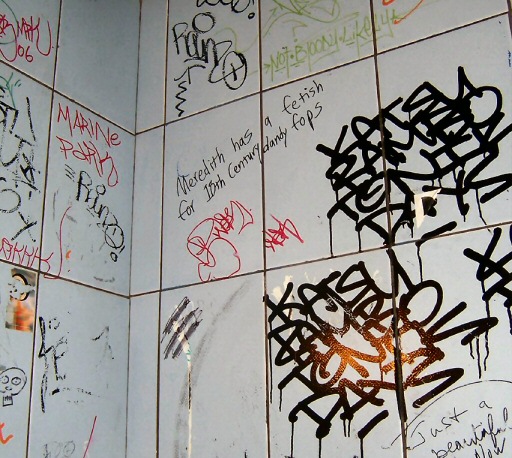 It's true. People, being people, have gone and scrawled a bunch of random code graffiti all over the damn internet. Some of it is vanity tagging. Some of it is borderline vandalism. And some of it is art. How do we tell the difference?

That's the very reason I put forth a modest proposal for the copy and paste school of code reuse. Not that it would have helped in this case, but it sure would be nice if someone could perform a grep replace ...

... on, like, the entire internet. So other projects don't absorb this critically flawed code sample.

It's true that some bathrooms are nicer than others. But as we've learned, it pays to be especially careful when cribbing code from the internet.

How to Motivate Programmers

Why Isn't My Encryption.. Encrypting?