Lately, I've been seeing these odd little signs pop up in storefronts around town. 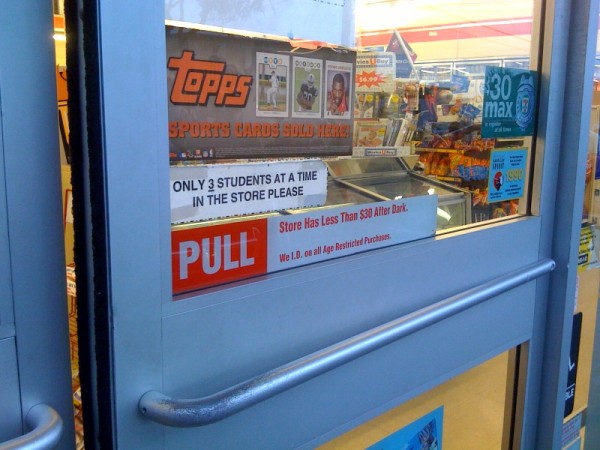 All the signs have various forms of this printed on them:

Only 3 students at a time in the store please

We took that picture at a 7-11 convenience store which happens to be near a high school, so maybe the problem is particularly acute there. But even farther into town, the same signs appear with disturbing regularity. I'm guessing the store owners must consider these rules necessary because:

I'm just guessing; I don't own a store. But like the "no elephants" sign, it must be there to address a real problem.

When you go into a restaurant and see a sign that says "No Dogs Allowed," you might think that sign is purely proscriptive: Mr. Restaurant doesn't like dogs around, so when he built the restaurant he put up that sign. If that was all that was going on, there would also be a "No Snakes" sign; after all, nobody likes snakes. And a "No Elephants" sign, because they break the chairs when they sit down. The real reason that sign is there is historical: it is a historical marker that indicates that people used to try to bring their dogs into the restaurant

All these signs are enough to make me question the ethics of high school students in groups of 3 or more. Although, to be fair, I've seen some really shifty looking graduate students in my day.

In truth, these kinds of limits are everywhere; they're just not as obvious because there's often no signage trail to follow.

I'm sure you can think of lots of other real world examples. They're all around you.

There are people who act like groups of rampaging teenage students online, too, and we deal with them in the same way: by imposing rate limits! Consider how Google limits any IP address that's submitting "too many" search requests: 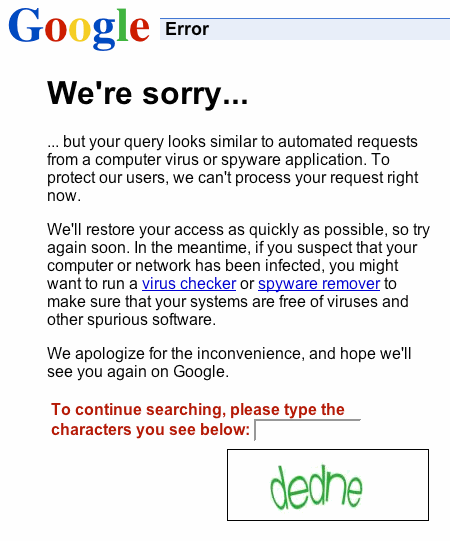 Often it's due to infected computers or DSL routers that proxy search traffic through your network - this may be at home or even at a workplace where one or more computers might be infected. Overly aggressive SEO ranking tools may trigger this message, too. In other cases, we have seen self-propagating worms that use Google search to identify vulnerable web servers on the Internet and then exploit them. The exploited systems in turn then search Google for more vulnerable web servers and so on. This can lead to a noticeable increase in search queries and sorry is one of our mechanisms to deal with this.

I did a bit of Google scraping once for a small research project, but I never ran into the CAPTCHA limiter. I think that entry predates its appearance. But it does make you wonder what typical search volumes are, and how they're calculated. Determining how much is "too much" -- that's the art of rate limiting. It's a tricky thing, even for the store owner:

Rate limiting isn't always a precise science. But it's necessary, even with the false positives -- consider how dangerous a login entry with no limits on failed attempts could be. This is especially true once your code is connected to the internet. Human students can be a problem, but there's a practical limit to how many students can fit in a store, and how fast they can physically shoplift your inventory. But what if those "students" were an infinite number of computer programs, capable of stealing items from your web store at a rate only limited by network bandwidth? Your store would be picked clean in a matter of minutes. Maybe even seconds!

Not having any sort of rate limiting in your web application is an open invitation to abuse. Even the most innocuous of user actions, if done rapidly enough and by enough users, could have potentially disastrous effects.

Even after you've instituted a rate limit, you can still get in trouble. On Stack Overflow, we designed for evil. We have a Google-style rate limiting CAPTCHA in place, along with a variety of other bot defeating techniques. They'be been working well so far. But what we failed to consider was that a determined (and apparently ultra-bored) human user could sit there and solve CAPTCHAs as fast as possible to spam the site.

And thus was born a new user based limit. I suppose we could create a little sign and hang it outside our virtual storefront:

Only 1 question per new user every 10 minutes, please.

There are a few classes of rate limiting or velocity checking you can do:

I was shocked how little comprehensive information was out there on rate limiting and velocity checking for software developers, because they are your first and most important line of defense against a broad spectrum of possible attacks. It's amazing how many attacks you can mitigate or even defeat by instituting basic rate limiting.

Take a long, hard look your own website -- how would it deal with a roving band of bored, morally ambiguous schoolkids?

Who's Your Coding Buddy?