On Our Project, We're Always 90% Done

Although I love reading programming books, I find software project management books to be some of the most mind-numbingly boring reading I've ever attempted. I suppose this means I probably shouldn't be a project manager. The bad news for the Stack Overflow team is that I effectively am one.

That's not to say that all software project management books are crap. Just most of them. One of the few that I've found compelling enough to finish is Johanna Rothman's Behind Closed Doors: Secrets of Great Management. She co-wrote it with Esther Derby. 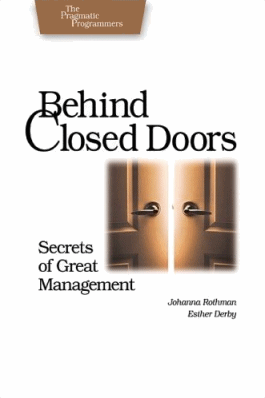 I originally discovered Johanna when one of her pieces was cited in the original Spolsky Best Software Writing book. Her article on team compensation (pdf) basically blew my mind; it forced me to rethink my entire perspective on being paid to work at a job. You should read it. If you have a manager, you should get him or her to read it, too. (Update: this essay is actually by Mary Poppendieck, who is also great. I'm leaving it in the post because it's fantastic reading, even if it's a little off topic.)

Since then, I've touched on her work briefly in Schedule Games and You Are Not Your Job. But I'd like to focus on a specific aspect of project management that I'm apparently not very good at. A caller in Podcast #16 took me to task for my original Stack Overflow schedule claims way back in late April. What was supposed to be "6 to 8 weeks" became.. well, something more like three months.

My problem is that I'm almost pathologically bad about writing things down. Unless I'm writing a blog entry, I suppose. I prefer to keep track of what I'm doing in my head, only anticipating as far ahead as the next item I plan to work on, while proceeding forward as quickly as I can. I think I fell prey, at least a little bit, to this scenario:

"Look, Mike," Tomas said. "I can hand off my code today and call it 'feature complete', but I've probably got three weeks of cleanup work to do once I hand it off." Mike asked what Tomas meant by "cleanup." "I haven't gotten the company logo to show up on every page, and I haven't gotten the agent's name and phone number to print on the bottom of every page. It's little stuff like that. All of the important stuff works fine. I'm 99-percent done."

Do you see the problem here? I know, there are so many it's difficult to know where to begin listing them all, but what's the deepest, most fundamental problem at work here?

This software developer does not have a detailed list of all the things he needs to do. Which means, despite adamantly claiming that he is 99 percent done -- he has no idea how long development will take! There's simply no factual basis for any of his schedule claims.

It is the job of a good software project manager to recognize the tell-tale symptoms of this classic mistake and address them head on before they derail the project. How? By forcingencouraging developers to create a detailed list of everything they need to do. And then breaking that list down into subitems. And then adding all the subitems they inevitably forgot because they didn't think that far ahead. Once you have all those items on a list, then -- and only then -- you can begin to estimate how long the work will take.

Until you've got at least the beginnings of a task list, any concept of scheduling is utter fantasy. A very pleasant fantasy, to be sure, but the real world can be extremely unforgiving to such dreams.

Johanna Rothman makes the same point in a recent email newsletter, and offers specific actions you can take to avoid being stuck 90% done:

I'm not big on scheduling -- or lists -- but without the latter, I cannot have the former. It's like trying to defy the law of gravity. Thus, on our project, we're always 90% done. If you'd like escape the 90% done ghetto on your software project, don't learn this the hard way, like I did. Every time someone asks you what your schedule is, you should be able to point to a list of everything you need to do. And if you can't -- the first item on your task list should be to create that list.

Music to (Not) Code By