I finally had time to improve my Visual Studio .NET keyboard shortcut summary macro. Instead of writing HTML to the console*, it now creates a HTML file in your user documents folder, and navigates the IDE to the created file: 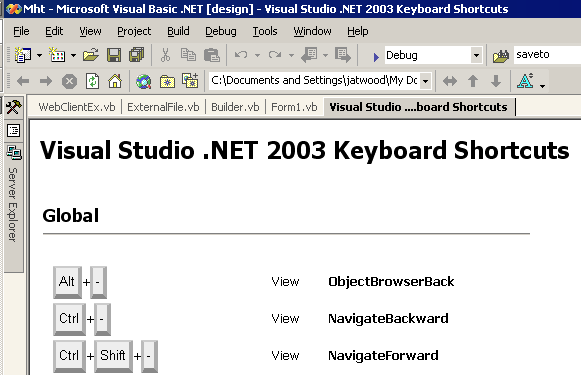 The advantage of a macro, of course, is that it queries the IDE for the actual keyboard bindings. It can also be sorted and grouped however you like. Very handy for erstwhile keyboard ninjas! This macro is tested and working in both VS.NET 2003 and VS 2005. Note that the macro generates an appropriately named file in each case:

It's also smart enough not to re-render if the file already exists. If you want to force a re-render, delete the file.

Here's how to install and run this macro:

* in VS 2005, there are a few minor extra dependencies: you'll have to add a reference to System.Xml and also import EnvDTE80.

Why Do Login Dialogs Have a "User" Field?