I like to take one or two books with me when I travel, and one of the books I chose for this trip is HCI Remixed. 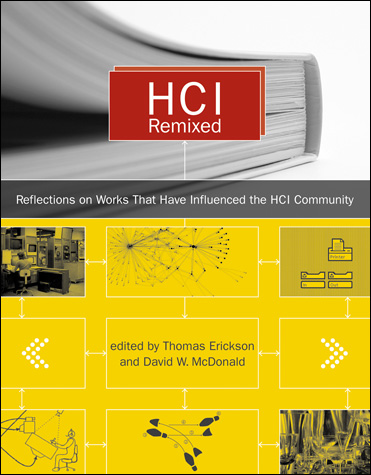 Sometimes the books I choose are a bust. Fortunately that didn't happen this time.

HCI Remixed covers all the major milestones in the field of human computer interaction. And when I say major, I mean it: things like Douglas Engelbart's famous demonstration, now referred to as The Mother of All Demos:

On December 9, 1968, Douglas C. Engelbart and the group of 17 researchers working with him in the Augmentation Research Center at Stanford Research Institute in Menlo Park, CA, presented a 90-minute live public demonstration of the online system, NLS, they had been working on since 1962. The public presentation was a session in the Fall Joint Computer Conference held at the Convention Center in San Francisco, and it was attended by about 1,000 computer professionals. This was the public debut of the computer mouse. But the mouse was only one of many innovations demonstrated that day, including hypertext, object addressing and dynamic file linking, as well as shared-screen collaboration involving two persons at different sites communicating over a network with audio and video interface.

So, all those trappings of modern computing that we take for granted today? Engelbart demonstrated them all two years before I was born. It just took a while for the rest of the world to catch up to his vision.

That's the lesson of many of the groundbreaking HCI discoveries presented in this book. Some people see further. Engelbart was so far ahead of his time in 1968 that his demonstration wasn't taken seriously -- it seemed absurd and impractical. It really makes you wonder which of today's HCI researchers we're ignoring but shouldn't be.

The book also takes an interesting approach; it doesn't summarize the papers, instead, it presents the reflections of current working HCI professionals on the papers. It's a little bit meta. You're hearing the impact of these HCI discoveries -- some big, some small -- as related by young researchers who were heavily influenced by them.

As a primer and overview of the field of human computer interaction, it's tough to beat. Reading this reminds me how far we've come, and yet how far we have to go.

The Problem With URLs