Have You Ever Been Windows Experienced?

Vista requires 10x the drive space, 8x the memory, and 4x the CPU power. It also substantially raises the bar for video; most integrated video solutions are no longer acceptable. The increase in minimum spec is not unreasonable, considering it's been 6 long years since the last release of a mainstream desktop operating from Microsoft.

Still, Vista-capable PCs can be had on the cheap. Even a basic $449 eMachines box exceeds these requirements. Granted, you might need to spend a bit of extra money to upgrade the memory from the default 512 megabytes, but even then you could buy a cheap 512 megabyte USB key and use it as ReadyBoost cache.

Unlike some of the new Microsoft Vista features, this one is remarkably well thought out. For one thing, it expresses the total score as the lowest subscore. This is an incredibly intuitive way to highlight that your PC's performance is only as good as the slowest subsystem. You know immediately which part of your system will give you the most bang for the buck when upgrading.* 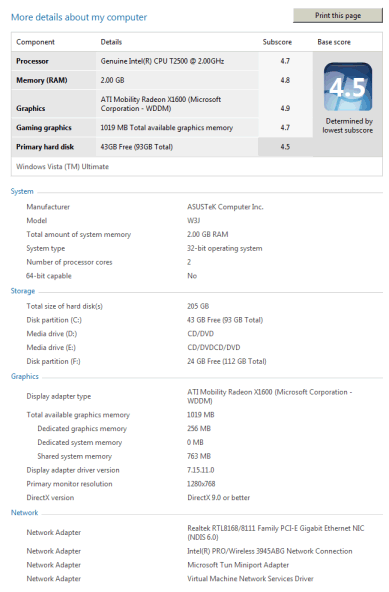 It's a nice, balanced set of results, exactly what I was shooting for with this laptop. I also planned to upgrade the laptop's hard drive later in its life to boost its performance, so this confirms that choice as well. But what exactly is being measured here?

If you browse to c:windowsperformancewinsat and look in the datastore folder, you'll find an XML file that describes the test results in detail. Here's the relevant Metrics section:

I can see the Windows Experience Index base score becoming a standard tool for bragging rights amongst OEM PC builders. And because Microsoft used a balanced set of benchmarks with a logical scoring mechanism based on the weakest link in the system, the WEI score is more meaningful than a third party synthetic benchmark: when these scores improve, users win.

Just kidding. My WEI is bigger than yours.

* There is one caveat here: gaming. A low-ish ~2 video card rating will be plenty for Aero and WPF apps. A higher video rating will only really matter for users that play games, so it might be unfair to reduce the entire system's score to the video card score.

Software: It's a Gas