Have you ever noticed that much of the online MSDN .NET framework help is.. not helpful? Take the the MSDN help for the IBindingList.AddIndex method, for example: 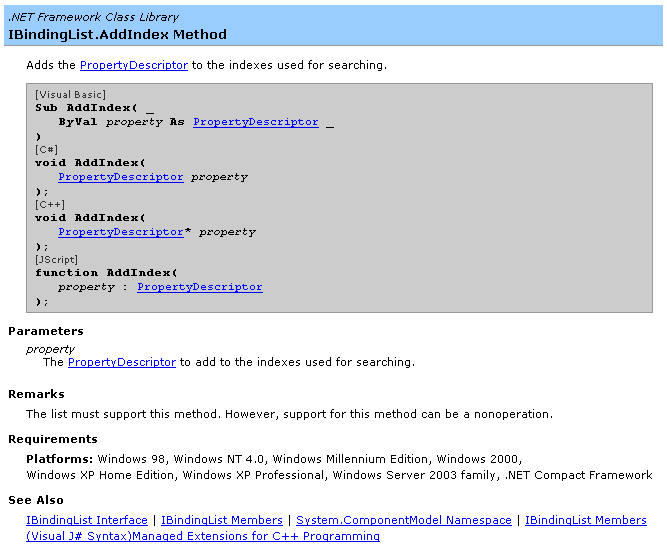 Scott Swigart calls this undocumentation, and elaborates further in his blog post:

Large swaths of the Framework are undocumented in exactly this way, and many v1.0 SDKs are, well, very undocumented.

I guess on the documentation teams, there must be some law that no class, property, method, or event will show up in the help with a big, bold, "Undocumented".

Can we stop pretending? Can you just mark everything as Undocumented until you get around to writing real documentation for it? Maybe even include a "Click here to vote to have this documented." For a simple test, if it doesn't include a code example, it's not documented. Just mark it as such and move on.

What really scares me is that tools like GhostDoc produce exactly this kind of useless undocumentation. Now, I understand that GhostDoc is just a tool intended to assist developers in producing real documentation. And like all tools, it can be used properly or abused. But whatever you do, please don't knowingly produce undocumentation for your applications. Have some respect for your users and your fellow developers. Either take the time to write helpful documentation, or have the guts to acknowledge that there simply is no documentation.

I encounter undocumentation all the time when I'm rooting around for help on the .NET framework. For example, take a look at the MSDN help for the PassportIdentity.SignOut method*. This particular example of undocumentation is even more egregious, because it actually includes code samples! Utterly useless, one-line code samples. In each language.

There are any number of websites documenting how to convert Fahrenheit to Celsius and vice-versa:

Oddly enough, the C++ sample on the same page is correct. I guess C++ developers really are smarter.

Grousing about all this undocumentation is funny, but it doesn't magically produce useful documentation. Here's something that might, though: why not make the .NET framework documentation a Wiki?

The Many Faces of (Windows) Death