All About My Cats!

Update 4/2/2007: In case it wasn't clear, the topic of this post is part an April fool's joke. Yes, those are our cats, and I love them to death, but I hope cat blogging is the last thing you'd expect from me. The other part was a wholesale switch to the most obnoxious advertisements I could find on the front page of this blog. If you didn't get to see it, check out a screenshot. A static screenshot doesn't do the blinking, flashing, and live video (with sound!) justice, but it's nothing you haven't seen before elsewhere. Unfortunately.

My wife and I own two cats. Although they haven't started their own blog-- yet-- I'd like to introduce you to them today.

After my wife and I moved into our first home together, we started to consider pets. Up until that point we were renters, so pets were out of the question. My wife noticed Floyd in the weekly animal rescue ad in the local newspaper, and we were immediately smitten by his sweet face and his old-timey name. We adopted Floyd in summer 2001.

As promised in the ad, Floyd is very, very sweet. He's a docile, zen-like cat with the World's Loudest Purr. He loves to curl up next to my head after I get in bed, and once he gets his "motor" going, it's the equivalent of a diesel engine idling inches from your face. I affectionately refer to Floyd as Buddy, Domestic Shorthair California Puma, or just plain Puma. The puma reference is meant to be ironic because Floyd is scared of almost everything and everyone except us. But he's certainly come a long way from the mean streets of Durham, North Carolina where he was rescued as a stray. 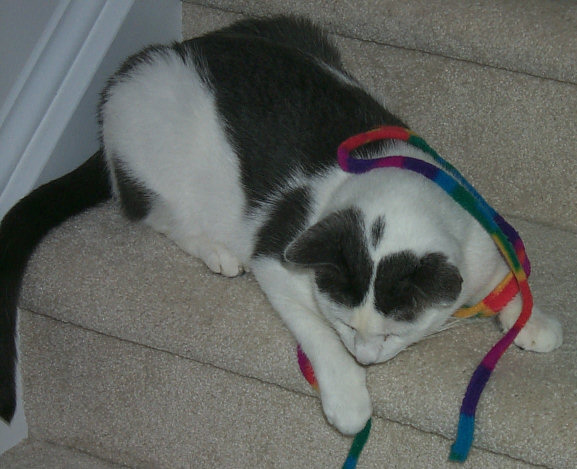 If you're a cat owner and a computer user, you know how difficult it can be to get anything done with a cat around. Cats love nothing more than curling up directly in front of your keyboard for attention. Here's a short video I uploaded to YouTube of me petting Floyd in front of my computer. It is safe for work, as long as you're comfortable with hot, sweet, man-on-cat action.

After about a year, we started thinking about adopting a second cat. We noticed that Floyd had little to do when we weren't around-- my wife and I both work-- and that he seemed to be retreating back into his shell after making so much progress in a year of living with us. We figured once you have the first cat, adding a second cat is hardly any additional work, and they can entertain each other when you're not around.

We visited our friend Diane, who rescued Floyd, and she introduced us to Elsie. 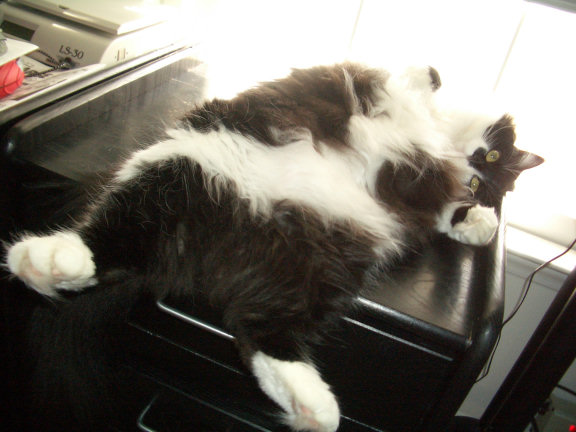 Elsie is definitely the Yin to Floyd's Yang. She's nuts. We had to install child locks on all of our cabinets because she would open them with her paw and get into whatever she could find. We bought a breadbox after finding a giant, ragged chunk ripped out of the wrapped loaf of bread we had left on the counter the day before.

Elsie can never get enough playtime, and delights in messing with Floyd and finding new cat hiding places. She demands attention, even when I'm working on the computer. 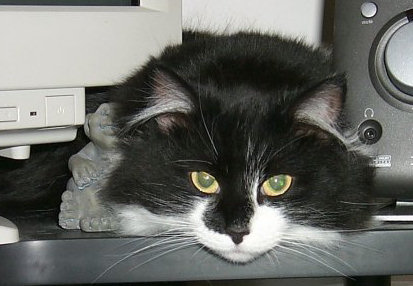 We love Elsie, but I do slightly regret adopting a long-haired cat. The increase in the volume of cat hair was immediate and dramatic. After Elsie arrived, instead of vacuuming bi-weekly or monthly, we had to vacuum weekly. No surprise, then, that I typically refer to her by her nicknames: Fluffy or Big Ball o' Fluff. We often wonder what she really looks like under all that fur. 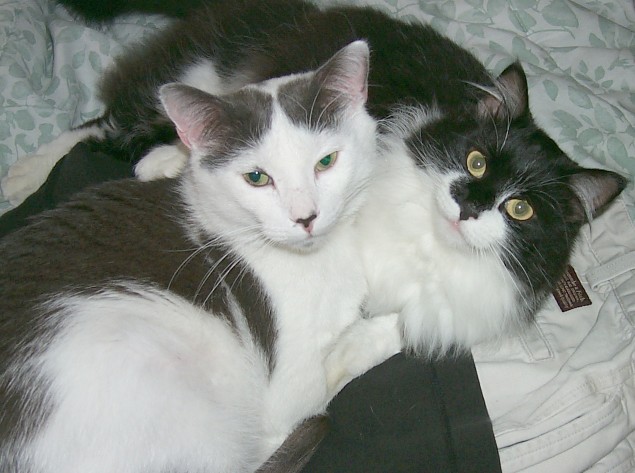 Now that Elsie's on the scene, I can definitively say that Floyd is no longer bored. Having two cats is far more entertaining for them-- and for us, too.

I'm not necessarily a "cat person" so much as I am an animal lover. I think the whole Dog vs. Cat war is ludicrous. (But I will say that cats are a far better match for lazy people like me.) Pets are amazing companions. I encourage you to visit your local animal rescue shelter and adopt a pet of your own.