A Celebration of The Windows Key

I'm sure everyone knows that the Windows key brings up the Start Menu, but there are also a bunch of standard Windows key shortcuts built into Windows:

Find Files or Folders (aka Search)

The advantage of the Windows key approach is that all of my most frequently used applications are exactly one key combination away; for example:

When I can't launch something with the Windows key, I fall back to the Start, Run (Windows+R) dialog. Run is passable, but not as helpful as it could be. Trying to perform a Start, Run, "word" won't launch Microsoft Word, for example. There are a number of third party replacements for Run that attempt to rectify that:

I've tried each and every one of these solutions, but nothing "stuck". I couldn't get myself out of the reflexive habit of Windows+R. Each of these apps has a nice set of additional features far beyond what the run dialog provides, but I never really used them.

In lieu of all these fancy solutions.. wouldn't it be nice if the Start, Run dialog was just a little bit smarter? That's when I stumbled across this blog post describing a very clever hack:

Here's a quick snapshot that shows how to set up the per-user Path environment variable for the shortcuts folder: 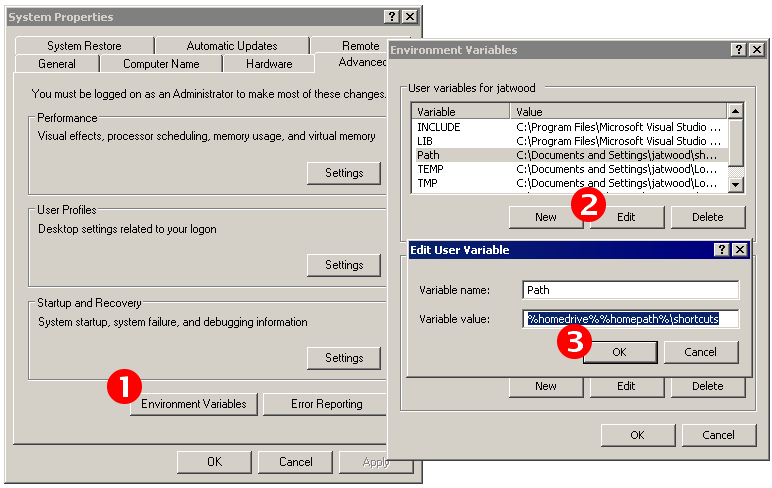 Now that I've set this up, I can type Windows+R, 2k3, Enter and Visual Studio 2003 launches! The only disadvantage-- and it's a minor one-- is that there's no autocomplete until you've typed the shortcut at least once. But for me, it's the best of both worlds: I can leverage the default Windows key accelerators and also have an unlimited number of "smart keywords" via my workhorse Run menu.

* Every time I see WinKey, I think of Winky Dinky dog. And I say it in that.. voice. I can't help myself.

** Here's a complete list of Windows XP/2000 environment variables the system can populate for you (eg, %date%). Gotta catch 'em all!